The United Kingdom Census of 1861 was taken on April 8th, 1861 and was the third of the UK censuses to include details of household members. The total population of England and Wales and the Islands in the British Seas, amounting to 20,223,746. This included those serving in the Army, Navy and Merchant Seamen.

Age and sex of each person: The actual age in years or months for babies under one year are recorded in the 1861 census. 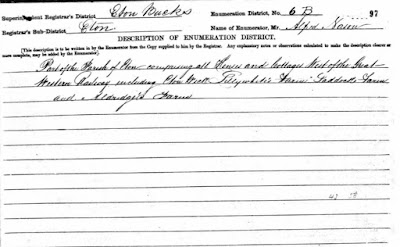 The area classed as Eton Wick for the 1861 census was the remainder of the Parish of Eton west of the Great Western Railway including Eton Wick, Lillywhites Farm, Saddocks Farm and Aldridges Farm.

The 1861 Census reveals that there were 78 households and 276 people resident in the village on the 8th April. The oldest person, Thomas Pusey age of 86, he was born in 1763. There were three other residents in their 80’s. William Miles was youngest at three months old was the second child of Henry and Sarah Miles. William was the only baby born in the first three months of 1861.

Click on this link to see our transcription of the 1861 census records for Eton Wick. We will be looking deeper into what the census reveals about Eton Wick and publish our findings in future articles.