A report on the Beating the Bounds 2nd August 1815

PERAMBULATION OF THE
BOUNDARIES OF THE PARISH OF ETON
ON WEDNESDAY, AUGUST 2nd, 1815. 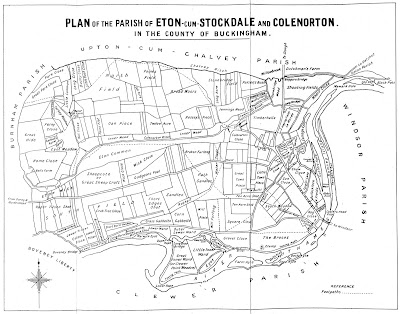 This article is reprinted on the 200th anniversary of the event in 1815 from a booklet published by the Overseers of the Parish of Eton-cum-Stockdales reporting the events of the Beating of the Bounds. The Rev. John Shephard M.A. gave a brief explanation of the origin and purpose of this perambulation in his book 'Old days of Eton Parish'.

It was a survival of a custom, more ecclesiastical than civil, which came down from the days of Merrie England. In olden times the perambulation took place in each parish at Rogationtide. It began at what was known as the Gospel tree, where the parish priest attended by the choir read the Rogation Gospel, and certain appropriate Psalms were sung. The purpose of the ceremonial was to pray for God's blessing on the land, and at the same time to secure to each tenant the rightful boundaries of his holding. Queen Elizabeth made an effort to retain this godly custom by her injunction issued 1559, and a Homily setting forth the double purpose of the observance was printed for use in the Rogation season. Under gloomy Puritan influences, this institution met with little encouragement. Anything of the nature of a procession was regarded with suspicion and as unworthy of the gravity of the true Christian. But, as we have said, it survived in Eton, though held not in Rogationtide as formerly, but in August. How may we account for this change of date ?

Probably it was to avoid any collision between the boys of the College and the town. The day chosen was after the breaking up of the School for the summer holidays, which took place then on Election Monday, and after the Election into College had been declared. The following is the account of the proceedings.


ON Wednesday, the 2nd of August, 1815, the Parish Officers, Charity Children, and Inhabitants, proceeded from the Workhouse Yard, with Music playing, and Colours flying, down the Street to the College Hall, where, after having sung the first Verse of the Morning Hymn, they were provided by the Provost and Fellows, with a Breakfast of roast and boiled Beef, and Ale : they then proceeded to Black Pots, and fixed a Bound-Mark on a Withy Tree at the Water Side : a Psalm was then sung, and three Cheers given.

The Procession then commenced, and proceeded from thence by the side of and through the Ayte, along the Ridge of the Bank separating the Shooting Fields and Cut-Throat Lane, in the Parish of Upton, to Beggar's Bridge; and having here fixed a Bound-Mark, and observed the usual Ceremony, they proceeded through the middle of Chalvey Ditch, to Bell's Farm ; making a Bound-Mark, as the Procession passed by little Park Close, opposite the Parishes of Upton and Burnham.

They took Water in the Creek, and proceeded by the side of that Ayte and Snap Ayte, to a division between Snap and Beck's Aytes, across to the Brocas, where a Bound-Mark Was driven in the Ground ; and from thence, by the side of the Bank, to Carter's Steps at Windsor Bridge they passed over the Rails of the Bridge to the Corner House, occupied by Wm. Peltham, through the Door-way and window facing the river, nailing a Bound-Mark at each place. They again took Water, and proceeded along by the side of the Bank to the Stile in the Back-Fields, at the Head of the Creek, and after having cut a Bound-Mark on a Withy Tree at the Corner, they crossed the Water and Mr. Cutler's Ayte, to the opposite side of the Ayte below the Weir ; from whence they proceeded by the side of the Ayte to a new piece of Ground made at the end of it, where having cut a Cross on an old Stump, and likewise on the Tree opposite, they kept close to the Bank to Newark, and having nailed a Cross on the Post, they took half Stream from thence by the Head-Pile in mid-river, opposite the Oak Tree in Wharf Close ; where having fixed a Bound-Mark, they kept close to the Eton side of the new made Ground, to the old Head of Black-Pots Ayte ; where crossing, they kept close down the River on the Windsor side of the Ayte, to the Withy Tree from whence they started : and thus the Boundaries of the Parish were Perambulated. God save the King was then sung. The Procession landed, and proceeded to the Brocas, where Refreshments were provided for the Children of the School by the Parish Officers.

N.B. It may be necessary to observe, that the Mayor of Windsor, the Chamberlain, and Town Clerk, met the Procession at Beck's Ayte, and continued with it to the Head Pile at Black Pots ; and likewise that three Cheers were given at each Bound-Mark.

The Procession consisted of the Revd. Mr. ROPER, (as Chaplain to the Provost), the Steward of the Manor, the Parish Officers, Charity Children, and Inhabitants.

These are images of the original 1815 publication 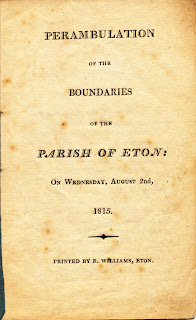 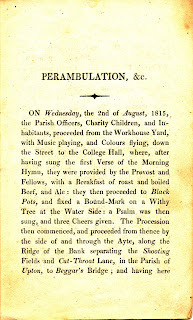 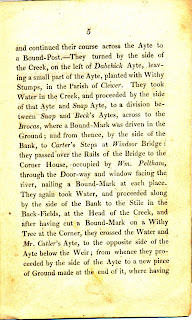 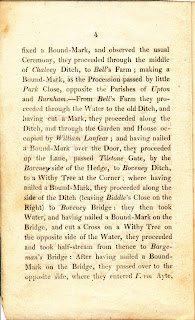 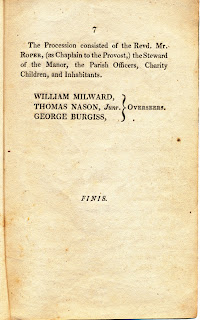 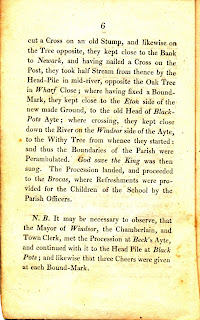