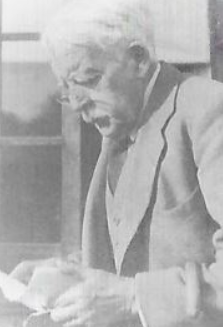 This photograph of Edward Vaughan was taken in the 1930s. 'Toddy' Vaughan was a house master in Eton College for 27 years. It was his initiative that bought Agars Plough and Dutchman's Farm for the College. In 1879 he climbed the Matterhorn, and was an enthusiastic horse rider despite sustaining a crippling leg injury in the process. He took a great interest in Eton Wick and was the village's greatest benefactor as a list of his many contributions would testify. He donated land and funds for building the Village Institute (now the Village Hall), gave generously to the Horticulture Society and the Church and its Sunday Schools. He was founder of the first scout troop in the village and its first Scout Master (he was at camp with the troop near Weymouth when the Great War was declared in August 1914). In c1907 he formed the Harriers and Rifle Club, started the Boys' Club in c1935 and was President of the Eton Wick Football Club. He also served on the Council and was at one time its Chairman.