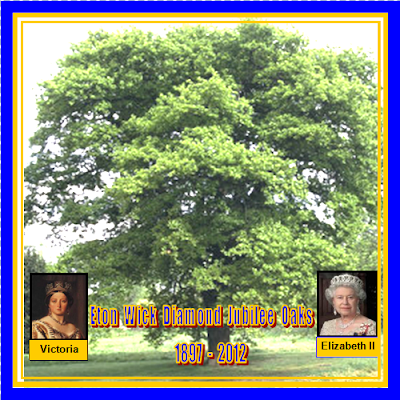 Mr. Cullum introduced the 25th June 1997 meeting of the History Group. He mentioned that plans for a visit to the Rowing Lake site had not yet been finalised; the unveiling of the Group's new plaque at the tree planted by 'Toddy' Vaughan to commemorate Queen Victoria's Diamond Jubilee was to be marked by a small ceremony towards the end of July.

Mary Gyngell and Mr. Povey had both written to Rail Track concerning the untidy state of the viaduct and Rail Track had since removed all the old boarding and have undertaken not to re-rent the arches. After acknowledging the generosity of the ladies who provided the Group's refreshments, Mr. Cullum handed over to Mr. Bond for the topic for the meeting: 'The Influence of Eton and Eton College on Eton Wick', after which Mrs. Ballhatchet would give a brief talk on 'Infant Welfare'.

Mr. Bond opened by pointing out that both Eton and Eton Wick had been in existence for many years before the College arrived in 1440, that Eton itself may already have been 700 years old at that time; and that whilst Eton College never set out to Influence Eton Wick, it had done so, in one form or another, for 557 years.

Mr. Bond then painted, in words, an onward-flowing picture of the area from those early times, when the sand around here would have been thickly wooded (lots of willow and oak) and boggy with more streams and an abundance of fish (1d. a bushel for young salmon!), it is apparently recorded in the Doomsday Book that Eton paid a tax of 100 eels. He pointed out how fortunate Eton Wick is to be surrounded with Lammas and Common lands and he urged the members to be on their guard against any invasion of this protected land. (Mr. Bond later mentioned that apparently two Eton Boarding Houses and houses near The Willowtree stand on Lammas land - although it should be noted that this can be permitted provided a similar area of land is freed to be registered as Lammas to compensate for the loss).

Mr. Bond was able to tell us a great deal about the history of the College, including lesser known facts such as the King (Henry VI) allowing weekly markets and two annual fairs because of the influx of people required for the construction of the Chapel and College - and keeping the College boys in Chapel whilst the Pig Fair' was on because the boys used to cut the pigs' tails off; and Edward IV's planning to send all the goods and chattels from Eton College to St. George's Chapel but suffering a change of mind when he realised that Windsor Castle could not accommodate his 'lady friend', Jane Shore; she was then housed at Eton College and all the College possessions were returned!

Needless to say, Mr, Bond's talk contained an abundance of information and it would be impossible to reproduce even a fraction of it here. As to the influence of Eton College and Eton on Eton Wick: The College must have hindered the growth of Eton itself, as a town, in that the spread of the College buildings resulted in demolition of town property and Eton residents moving out to Eton Wick. Against this must be balanced the opportunities for employment offered by the College over hundreds of years to both Eton and Eton Wick residents. It should be remembered, too, that many Eton masters and their wives initiated and supported local projects and that Eton Wick enjoys its Village Hall courtesy of its College benefactor, Toddy Vaughan. Another Eton master, Mark Anthony Portly (b. 1731) founded the charity which resulted in the setting up of Eton Porny School. College boys still come and help our more elderly residents and two boys help at Eton Wick School.

Mrs. Ballhatchet continued by outlining the influence the College had on the provision of health care for mothers and children - starting (in 1915) one of the first baby clinics in [Buckinghamshire, which was run by a Nurse Orchard with a committee Including Eton masters' wives. By 1917 the 'Babies Welcome' clinic was well established, records of babies' health were kept and talks were given by the local doctor, Nurse Orchard or one of the masters' wives. Mothers were able to make purchases at the clinics of such items as baby milk and Viral, material, knitting wool and patterns, second-hand clothes - and Eton College dripping? Eton Wick's clinic always did well in County competitions and presentation of the certificates awarded was made at an annual picnic at one of the boys' boarding houses; and there was always as Christmas Party. This clinic, started 82 years ago, still meets once a month with a local doctor and nurse in attendance.

The next scheduled meeting was to be on WEDNESDAY, 10th September 1997, when a representative of Oxford Archaeological Unit will give a talk on 'THE ETON COLLEGE ROWING LAKE'.

During the 1990's the Parish Magazine of Eton, Eton Wick and Boveney reported on the meetings of the Eton Wick History Group. A member of the audience took shorthand notes in the darkened hall. This article was published in the August edition of 1997.