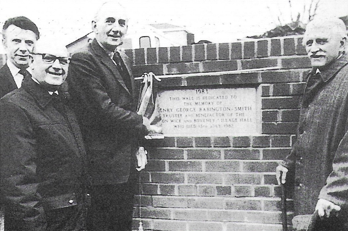 The Vice Provost of Eton College and a Trustee of the Village Hall, Mr David Macindoe, unveils a plaque dedicating the new boundary wall of the Hall to the memory of Henry Babington Smith, who was for twenty years a much loved Trustee and benefactor of the Village Hall. Pictured with Mr Macindoe are Eton Town Councillor Mike Tierney (left) and Village Hall Chairman Jim Burger, and on the right, Henry's brother, Mr Bernard Babington Smith. Following his retirement as a master at Eton College, Henry Babington Smith served the village community in many ways until his death in 1982. During the 1960s he voluntarily kept the churchyard tidy and the grass cut. Only when the task became too great was a committee established to find ways of funding the maintenance. Henry Babington Smith served on this committee too, until his death. The central bed of shrubs in the churchyard is also dedicated to his memory.