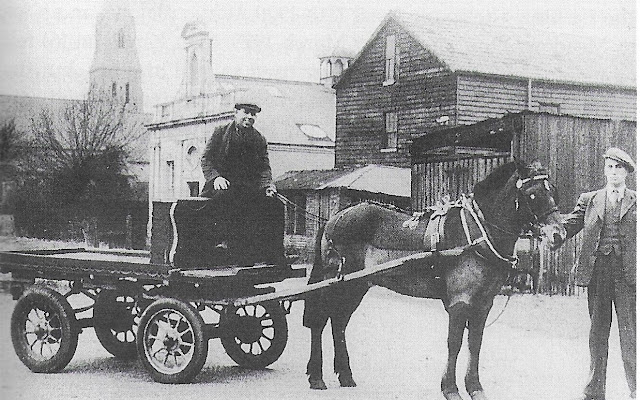 George used his horse and cart to trade in greengroceries, removals and other odd jobs. He also ran pony and trap trips for tourists, operating from the Windsor Castle taxi rank. George and his horse-drawn trans-port appeared in several films, which included the 'Carry on' series. George served in the Western Desert Army during the Second World War.

Chris owned the Cockpit Restaurant in Eton High Street before taking over the Barksfield Bakery in Dorney. In the 1960s Chris regularly waited each night at the Burning Bush bus stop for the last Green Line coach of the evening, bringing his step-daughter Penny home from her leading role in the 'Black and White Minstrels' show at London's Victoria Palace Theatre. The photograph, taken in the late 1940s shows the now removed Eton Parish Church spire, the Roman Catholic Church and the 'Well's' timber built shed, now replaced with an office block.