The 500 German bombers raiding London met with a tremendous anti-aircraft barrage during which eight were destroyed. Fire from the gun batteries sited at Dorney, Slough, Datchet and Windsor was intense. The bombing started huge fires in Hammersmith which could be seen from Slough as the night sky took on a red glow.

Eton U.D.C. Civil Defence and other voluntary services received thanks from the Council chairman for the way they had carried out their duties during the preceding months. The vote of thanks also embraced the Eton Fire Brigade who had given gallant service in air raids away from the town.

Eton had been a haven for London A.R.P. personnel, who after enduring several harrowing nights of duty, came to get a night’s sleep at the Baldwin Institute. An early morning call from Eton ARP night duty shift ensured that the sleepers returned to duty by the first train from Riverside Southern Railway station.

One or two small high explosive bombs fell on Dorney camp including an oil bomb into the Roundmoor ditch, with no significant damage being done. Other bombs fell in the sewage farm, Eton Wick one of which was an unexploded device (UXB). Later when the bomb exploded, it was frightening for those nearby but was also an amusing episode for two village lads as related by John Pardoe.

“With Malcolm Chamberlain I had been looking for moorhen nest but having had no success we made our way from Dorney back to the village via the sewage farm. On approaching the farm, several policemen were noticed accompanied by Billy Hutton, the farm foreman who immediately told us to clear off. However not receiving a quick response to his request Billy gave chase and got within maybe 20 yards of us when the bomb exploded. We escaped but poor Billy received some of the contents of the sewage beds”.

The London blitz had rendered many families homeless and scattered and it was suggested to the Eton U.D.C. that some unused local properties should be requisitioned, and efforts made to house some of these people. The surveyor quickly pointed out that many of these properties in Eton and Eton Wick were in a very bad state of repair and would need money and time spent on them, also materials were not always obtainable. Air raid damage and military requirements had priority for building works, such as Dorney camp, which had now been completed with Nissen and wooden huts. Only the brick-built armoury was within the boundary of Eton Wick located across the Roundmoor ditch and accessed by a wooden bridge; today its location is the garden of 22 Tilstone Close.

Improvements in equipment brought the installation of Radar and more powerful 3.7- and 4.5-inch guns but camp accommodation did not improve as will be shown later. 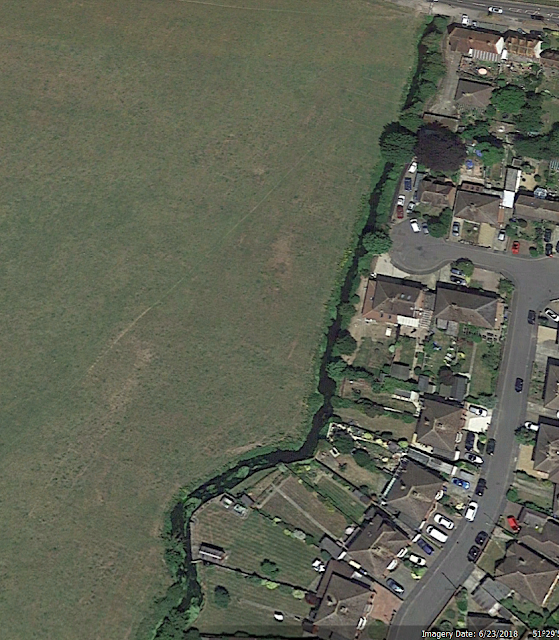 The satellite image taken from Google Earth dated 23rd June 2018 reveals the outline of most of the WW2 Dorney Camp buildings as "Crop Markings".

The wartime measure of permanent summertime with clocks set one hour advance of Greenwich mean time and two hours advanced in the summer months allowed long light evenings. On many such evenings the Whitley, Wellington, and Hampden bombers of the R.A.F. were seen flying over the village on their way to attack targets in occupied Europe or Germany.

To boost the sale of National Savings Certificate and War Bonds, city, town, and village National Savings Groups held special savings week to buy war weapons. The first of these special weeks, held during the last week of April, by Windsor, Eton, Eton Wick, and villages in the Eton Rural District was designated ‘War Weapons Week’. Various events took place including a display of modern weapons by the Grenadier Guards in Eton as well as the exhibition of a German Messerschmitt 109. At Eton Wick a great effort was made to ensure success and a programme of events for the week was arranged, starting with a Saturday evening whist drive held in the village hall. Members of the Methodist Chapel held a popular social evening which was well attended. The village school children gave their support with a fancy-dress parade around the village. Albert Bond, with his horse and cart suitably decorated for the occasion, headed the procession which ended at the mobile cinema van then visiting the village in support of the National Savings campaign. Another attraction was the display by the Grenadier Guards of weapons and armoured fighting vehicles. The value of Saving Certificates and Bonds sold at the village post office during the week were shown on an indicator board that had been made for the occasion by boys at Eton College and erected outside the village hall for this special week production machine tools were installed in the large display window of a Windsor store by the Slough engineering firm G.D. Peters. Machinist Connie Thorogood’s memory of the week is of Guards from the barracks showing more interest in the operators than the products, being a greater attraction than the firm’s efforts to recruit women for war work. During the following war years other special saving weeks would be held.

Restaurants and cafes supplying of meals were subject to war restrictions as to the number of courses served, cost and quantity. To help supplement the diet imposed by rationing the Ministry of food suggested community feeding centres, later called British Restaurants. Seeking an opinion, the Eton U.D.C. canvassed Eton and Eton Wick. Results showed sixty-four in favour with eleven against for Eton whilst Eton Wick returned fifty-four in favour and thirty three against. Having decided that community feeding should go ahead the restaurant was set up at the Eton Church Hall with Mrs Bowater as manageress. Seating 120 persons, the restaurant opened in December offering a plain menu of a meat meal 8d., Bowl of soup 2d., a Sweet 3d. and a cup of tea for 1d.

A extract from The Daily Telegraph : Story of the War: Volume 1

A RAID ON LONDON

A very heavy raid on London caused many casualties, and great destruction. Several of London's most famous buildings were damaged, for the German 'planes unloaded their bombs indiscriminately in the heaviest attack since the " reprisal raid " of April 16th, which was the worst the capital had experienced.

The attack in the brilliant moonlight cost the Germans at least thirty-three 'planes and about 160 trained personnel, the highest penalty they had paid in night raids. Our night fighters destroyed twenty-nine, and four others were shot down by A.A. fire.

The German High Command communiqué said that hundreds of high explosives and more than 100,000 incendiaries were dropped in the raid, which was described as a reprisal for the "methodical bombing of the residential quarters of German towns, including Berlin ".

London's famous Parliament clock, whose Big Ben chimes are nightly broadcast all over the world, was battered, but was still keeping perfect time and striking normally next day.

A small bomb hit the top of the Clock Tower just above the face of the clock. The face Was dented and blackened, and some of the stonework and ornamental ironwork damaged.

Westminster Hall, the oldest part of the Houses of Parliaments, was hit. Damage was done to the roof, and a fire started among the timber.

Firemen were able to save most of the historic timbered roof, which dates back to the twelfth century.

Only scorched and blackened walls remained of the House of Commons chamber, where M.P.s had debated for ninety years. It was hit by a high explosive and a fire-bomb, and was reduced to a heap of rubble. The chamber of the House of Lords and other rooms in Parliament also suffered damage.

Captain Elliott, the House of Lords resident superintendent, was killed, and two policemen on fire duty also lost their lives. No members and few officials were there at the time.

Westminster Abbey was left open to the sky. The main fabric was unharmed, but damage had been done by the water used by firemen and the roof over the Lantern, the central point of the Abbey, was destroyed and the pulpit partly destroyed.

Part of the debris of the Dean's House, which was destroyed, fell on Cloister Garth, the historic square of turf in the middle of the cloisters, which themselves were severely damaged.

The most historic parts of the Abbey were uninjured. The eastern part of the Abbey, where the Royal tombs are situated, was left intact, as were the Sanctuary and the eastern chapels, containing other Royal tombs.

Wearing his surplice and sitting in a pew in the darkened Abbey in the early hours of yesterday morning, Dr. Perkins, the sacrist, said " But for the A.F.S. men and our own fire-fighters, who put everything they had into the fight to save it, the Abbey must have been destroyed.

" When the Deanery went, Dr. de Labilliere and his wife inspired us all by the calmness and fortitude they displayed in the face of the loss of their lovely home and of every article of their personal belongings.

" They stood on the lawn with the fires burning all around them, concerned only with the safety of others and the efforts of the firemen to save the Abbey from being completely destroyed."

The British Museum was set alight by a shower of fire-bombs which burnt through the roof and set fire to the back of the building. Fire-watchers on the roof dealt with many of the fire-bombs, but others burnt through before they could be tackled.

Fortunately most of the treasures had been removed to safety, and the damage was comparatively light.

The first raiders arrived late in the evening. Others followed in heavy waves, hurling high-explosive bombs and incendiaries at London. Guns and fighters harried them, but for most of the night the waves came on.

Soon after the din of battle and of bursting bombs had died away, daylight showed a fading fog of smoke, turning the spring day to a weird November. Cinders had wafted down like black snow—the air had been acrid until the early hours.

Fragments of charred paper and smuts were carried nearly 20 miles into country areas.

In many areas little heaps of sand and the remains of burned-out incendiaries on the pavements and roadways, testified to the large number of fire-bombs dropped.

Five hospitals hit, three churches fired, buildings turned to reeking ruins and casualties at a hotel and a street market—these were some of the results that the enemy could show for his losses. But London's spirit was still sound.

The following day, Sunday 11th May 1941 the Daily Telegraph reported:

Last night Rudolf Hess, Deputy Fuhrer of Germany and one of Hitler's closest friends, landed in Scotland by parachute after flying from Germany—one of the most astonishing and puzzling incidents of the war. There were many conflicting explanations. Berlin announced that he was mentally deranged.