So said Frank Bond as he introduced his talk on "Village Shopkeepers - Past and Present" on the 27th May 1998. He referred first to the hamlet which was Eton Wick in the year 1800, with just 100 residents; and the to the early 20th Century shops which sold hardware„ groceries etc., and his talk progressed through to illustrate not only the various changes which had occurred. in Eton Wick' s shops and services up to the present day, but also the considerable changes in the community itself There had been seven farms, now some had been adapted for riding schools and others given over to engineering. The countryside itself has undergone changes with areas previously used for crops now given over to leisure and recreation facilities. 165 years ago there were 300 people living in Eton Wick. There was no evidence of any shops here then, or any easy means of getting to shops elsewhere; for there was no transport, other than horse-drawn vehicle or 'Shank' s pony' . People grew their own vegetables, they would purchase milk, flour etc. from the farmers, and they would make home-make jams, pickles and other preserves for their larders; some would have kept poultry for their eggs and meat. There would have been work for the village' s blacksmith, a chimney-sweep, and also for cobblers and  boot makers.

By the 1920' s Eton Wick was being visited by the muffin-man, and a winkle-man and a man who sold fly-papers; did the fly-paper become a muffin-man or a cobbler in the Winter months? Gypsies came selling clothesline props and pegs - most people were a little afraid of Gypsies because of their apparent ability to successfully lay a curse on you if you upset them. Visits from the 'rag and bone man' with his horse and cart were more welcome, particularly by the children who might be given a balloon in ex-change for old rags. As the years progressed there were the annual visits from a `gentleman-of-a-darker-hue' who went from door to door selling ties, collar-studs, etc. from a suitcase. A Mr. Henry came out from Windsor every Thursday with a cart loaded with galvanised goods, ironmongery, soda, soap-flakes and the famous 'Reckitts Blue'. Another welcome visitor, perhaps in later years, was Tom Cox on his Walls Ice Cream Stop Me and Buy One' tricycle - the fact that he only had one leg gave him few problems. There were two other ice-cream vendors - Vettise's and Sacco's - they just came round on Sundays. Out of season these ice-cream sellers would use their carts to transport the rabbit skins and other goods they bought locally. Tom Cox also sold cakes and bread for Denney's bakery (14 cakes for 1s. 0d.). He was also pretty handy with his bicycle pump in that when some poor soul stepped out of hedge in front of him he hit him over the head with it.

Eton Wick had its own coal merchants, delivering by horse and cart. Bill Parrot' s horse was stabled in what is now 'The Greyhound' skittle alley. Early in the 1930's Scottie Hood' s horse' s stable caught fire and Scottie had to be physically restrained from entering the inferno to rescue his horse. The horse perished but the village had a whip-round and raised enough for him to buy another horse. The coal carts, and others, would be cleaned up and would carry the children of the village on Sunday School outings. 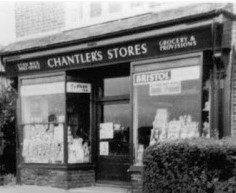 Chantler then took the shop over and added gas masks to the provisions on offer. Harry Chanter was a very helpful and kind man. He was a trustee of the Eton Poor's Estate for 60 years, he was held in great an affection. There were other tenants of the shop after Mr. Chantler, until it was converted into flats in 1987.

A Mr. Slade set up shops in St  Leonard' s Place (possibly named so because of its view across the Thames to St Leonard' Hill?), this was the first shop in Eton Wick to sell ice-cream. Mr Slade moved on to The Grapes'. In the mid 30' s Joan Taylor set up as a newsagents, early in the 50's it was taken over by the Cowells, then Paxton, Lock and in the 1960' s by Mr. Lunn. In recent years the shop has been converted into fiats and is now called Taylor Court. Yet another shop which no longer exists is the old aquarium shop in Wellmans Cottages. This shop was run from 1908 until 1923 by Bill Hearn - he stocked umbrellas, saddlery, etc. He sold the shop when his wife died and took premises in Victoria Road (From `General' Hill who made nuts in the War?) where he set up a workshop - he ran two taxis. Later this business was to become Ellis Motors, and engineering works was still in operation at the time of the talk. Mr Wiggins followed Mr. Hearn into the 'aquarium' shop (yet another place where Tom Cox used to work); it became Graham's grocers and Provision Merchant, then John Barron. Later it became The Aquarium Shop, and has now reverted to being a private dwelling. We mustn't forget the cycle shop run by Ted Woolhouse from Bonaccorde Cottages "Royal Enfield Made Like a Gun", now a private residence.

There was a doctor' s surgery in Alma Road, and can you believe we once had a Co-op in Alma Road! There was also a small shop in Shakespere Place (1880). Charlie Ayres started selling groceries in there in 1898. Bill Bolton failed as a butcher there; he was followed by Lucie Binfield, then Mr. Wilshire and then the Chinneries who dealt with rationing. Harry Cook then used it as a workshop. This too, has since been convened into flats. Prior' s, the newsagents in Moore's Lane, was built by Annie Tough's father, James Moore. This shop was occupied by Mr Sibley and then by Mr Prior.

Another butcher's shop was George Mumford's at 31 Eton Wick Road (Bracken Flowers and a Betting Shop were there in 1998). Mr Mumford tended to get into trouble for letting people have meat in excess of the ration (it  even had a 'Flanagan and Allen' mention at the Victoria Palace). Mr Mumford altered the premises to accommodate his elder daughter and converted part (later to become the betting shop) into a Laundrette. The butcher's shop was later to become a Greengrocers, then a baker' s and is now Bracken the Florist.

In 1951 the Eton Urban District Council built the `Darvilles' parade of shops. In the shop 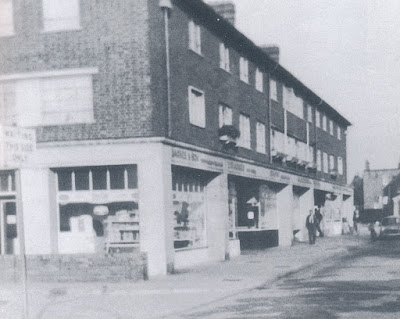 nearest to the Village Hall was Mr Barnes (wet and fried fish), next came 'Arnolds' the Butcher's, (when Roy Arnold retired it became a hairdressers).The third shop was O'Flaherty (chemist); fourth was Clinch's Bakery and Darvilles the grocer next to them. Anderson (newsagent and gents' hairdresser) occupied the sixth unit and A. Bond & Son (greengrocer) the final shop opposite the Shepherds Hut.

Terry Anderson (who acquired the land for the Catholic Church) sold to Gowers; Clinch sold to Darville - who doubled the size of the shop; O'Flaherty sold out to a Mrs. Baker, but there have been several tenants since. When Frank Bond sold his Greengrocers shop it had been in business for 90 years.

In I973 the Bell Lane parade of shops was built; Joyce Howard (ladies clothing); another was for hi-fi and electrical goods and then homemade brewing equipment and vehicle sundries. Country Fair, the equestrian shop, is to close and be replaced by a bistro. The hairdresser' s has become `Pipedreams' for cake-baking accessories. 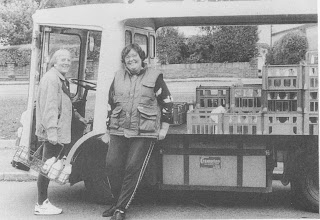 The final photograph shown on this fascinating evening was of Mrs. Cooley and Pam with their milk-float - the last of our milk delivery people. A suggestion for a Millennium Memorial - commemorate site of the 1st school, the 1st official building for church services and the 1st Institute for Eton Wick. All in one building at the bottom of the garden of 'The Greyhound'

The following meeting was held on the 8th July 1998 when the topic was LOCAL FETES, FAIRS, CARNIVALS AND CONCERTS.

During the 1990's the Parish Magazine of Eton, Eton Wick and Boveney reported on the meetings of the Eton Wick History Group. A member of the audience took shorthand notes in the darkened hall. This article was published in the June 1998 edition.