Tough Assignment - Annie Moore - From The Iron Room to Planning a New Chapel.

Annie was much encouraged by the continuance of the Sunday School and the improved services at the Iron Room, but she was by no means satisfied with this and began holding meetings in her own home. This did not please the elders of the Congregational Church, but such classes were to Annie an essential feature of a Christian life, and she was as determined as ever for Eton Wick to one day have its own Primitive Methodist chapel. Many months passed and Annie began to get discouraged. Although she was very busy helping the families of the farm hands at Bell Farm and her efforts were appreciated, she seemed no nearer to leading any of them to Christ. Even the attendance at the Iron Room was dropping. She now approached the Congregational Church and asked permission to arrange for Methodist friends to hold mid-week services in the Iron Room chapel.

These were held and one Christmas Eve, Thomas Green, a carter at Bell Farm whom she had helped several times, decided to attend. This in itself was a remarkable event, for Thomas Green usually spent most of his free time, Sundays included, in the public house. It would seem that at last the 'bullying' by Annie had had an effect, and somehow - or as Annie would have said -through God, the words of the testament and hymns spoke to Thomas with so clear a message that he became a new man in Christ.

Annie learnt of this after the service as she and Thomas made their way back to Bell Farm for he still had work to do in the stables. She was determined to make certain that he remained true to his conversion and hurried over to his cottage and offered to help his wife and convert their cottage into a clean and bright home rather than a drunkard's hovel. Annie does not quite say so in her memoirs, but it seems likely that Mr and Mrs Green were her first real converts to Methodism in Eton Wick, and now very considerably heartened she decided to formally approach the Primitive Methodist Church for help. The time was ripe, for although there had been no land free for development in Eton Wick on which a chapel might be built, the situation was now changing. Land across the parish boundary had been bought by James Ayres, who soon proceeded to lay out the area in streets and building plots. By 1884 the first road and houses were under construction. Although an extension of Eton Wick, because the development lay within the adjacent parish, it became known as Boveney New Town with Alma Road the main street of this busy new community. There was now a possibility that land could be found for a chapel, and abundant new people to be brought within the fold. 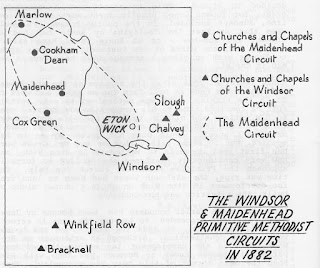 When Mrs Tough came to the district Windsor was part of the Maidenhead Circuit, but in 1882 the Circuit was divided into two, Windsor, Bracknell, Winkfield Row, Chalvey and Slough becoming the Windsor Circuit, leaving Marlow, Maidenhead, Cookham Dean and Cox Green in the smaller Maidenhead Circuit. The Windsor Churches declined to embrace Eton Wick in their Circuit because all their available energies were directed towards the growing society at Sunningdale.

Mrs Tough, therefore, decided to approach the Primitive Methodists at Maidenhead. They were doing well. Their new chapel had opened in Queen Street in 1882 and membership was increasing. Hopes for the future were bright and under the Rev George Doe they were ready to face new challenges. Eton Wick was now missioned by the Maidenhead Church - preachers from that Circuit visited the village to hold Sunday services. The mid-week class became official and the newly formed society became part of the Maidenhead Circuit. Mrs Tough could now put new effort into finding a site for a chapel. 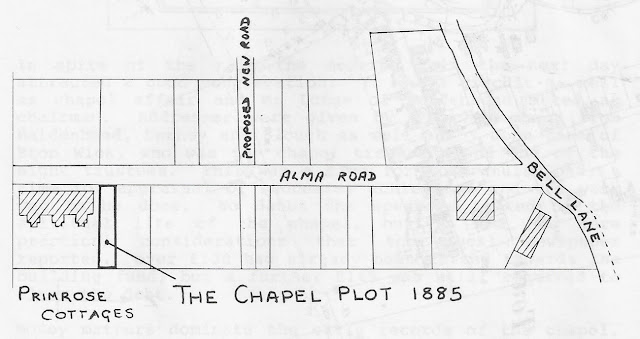 The Eton Wick History Group is most grateful for the kind permission given by the Eton Wick Methodist Chapel to republish this history on this website.
Posted by Steve Denham at 06:00