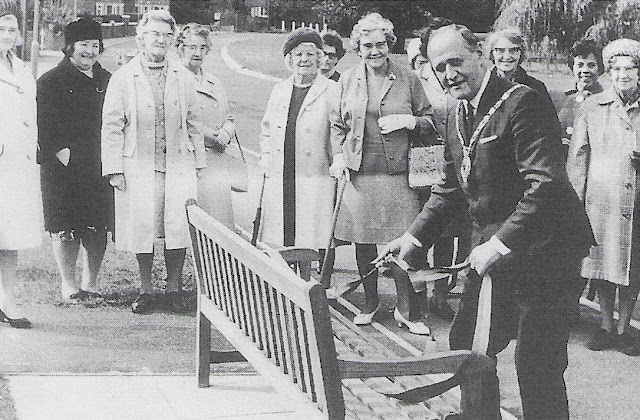 Ron Clibbon cuts the ribbon on the seat presented to the village by the Eton Wick and Boveney Women's Institute to mark the Buckinghamshire Federation's 50th anniversary in 1970. The Institute members in the photograph are, from the left: Mrs Attride, Mrs Kohler, Mrs Willsher, Mrs Hessey, Miss Banister, Mrs Joan Jones, Mrs Wilson, two other people are hidden from the camera, Mr Clibbon, Mrs Wyeth, Mrs Leary and Mrs Paintin.

Ron Clibbon first became a councillor with Eton Urban District Council in 1949/51, and again from 1953 until 1974 when the E.U.D.C. became the Eton Town Council. He served as a Buckinghamshire County Councillor from 1964 until 1975, and then a Berkshire County Councillor. He was Chairman of Finance from 1974 to 1977. He was also a Justice of the Peace from 1959 to 1987; a member of Berkshire Magistrates Courts Committee 1975/87, a member of Thames Valley Police Authority 1974/87 (Chairman 1977/85) and a member of the Police Council for the U.K. 1983/8. He was the Secretary and Treasurer of the Eton Wick Village Hall Committee 1964/72 and Chairman of the Royal Albert Institute Trust in 1983. He was appointed Deputy Lord Lieutenant for the Royal County of Berkshire in 1982.