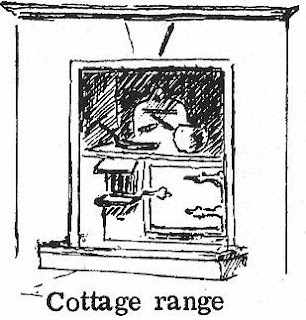 Many memories centre round the home and childhood, though naturally they vary from family to family and decade to decade.  In general homes were less sophisticated then those today.  There were few household gadgets and luxury items, and for much of this period many homes in the Wick ware without gas, electricity or running water. None had main drainage.  Fire and elbow-grease provided the energy.  Floors were usually often a home-made peg rug, bright with colours of cut-up rags. Next to this the fender would gleam like silver, having been burnished weekly with a square pad which looked like a piece of chain mail. In contrast to the silver was the black of the cottage range made shiny by dint of hard rubbing and blacklead. The range burnt solid fuel and had two hobs and a small oven. They were still being installed in the 1930s in homes which until then had managed with open grates arid side ovens. The side ovens were heated by the open fire; once hot, they retained their heat for a long time, and the skilful housewife could very  successfully regulate the temperature by  judiciously refuelling the fire. Often there was a trivet on which a kettle or saucepan could be stood to boil; but saucepans were also stood  directly on the glowing coals, and it was hard work to clean off the soot without the use of  detergents and 'Brillo' pads. Bread and even fish could be toasted in front of the fire, and in one family at least it was the regular Sunday job for one of the daughters to toast a bloater for  Father's tea. 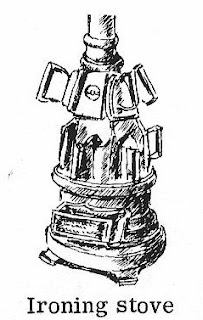 unpleasantly hot job in summer.  The summer months could be trying in other ways. In homes near the brook, clouds of mosquitoes made hot, sticky children hide their heads under the sheets trying to sleep. Flypapers were hung in the downstairs rooms and were soon festooned with dead flies.  However their effectiveness did not last forever, and in time the dead flies would drip off - a horrid but commonplace occurrence which was simply accepted as the way of life.

Those were days when many families still had to fetch water from a communal pump or outside tap. It was a wearisome chore, and on winter mornings the pump had to be primed with a kettle of hot water before it would work and the tap unfrozen with a candle or paper burnt close to the closed stem of the tap. Buckets of water had to be carried in to fill up the copper on washdays and bath nights; afterwards the water had to be baled out into buckets and then tipped on to the garden or common.  Few houses had bathrooms - there are said to have been only two in the village when the first District Nurse came to live there in 1916, and she insisted on living in one of them (Wheatbutts Bungalow). For other households washing in a tin tub in front of the fire was a once weekly routine.  One story concerning bath night is now forever frozen in my  imagination. It tells of an elderly lady bathing in the kitchen but discreetly hidden from view by a draped clothes horse - or at least she was until 'God Save the King' was played on the wireless and, loyal to the chore, she rose to the occasion.

Of necessity most children were required to help a considerable amount in the home. Washing by hand was a long, wearisome task, especially when there were ten children in the family; and there are still sad memories of  mothers washing in the evening by candlelight. When the rubbing, scrubbing, boiling and rinsing was finished., the mangling could begin.  The children could help by folding the things and then turning the handle of the mangle with both hands if necessary - while mother guided the linen through. Washing up, dusting, chopping wood and running errands were jobs which perhaps are not so different  today, but it is rare in the Wick now to see children looking after their younger sisters and brothers - including the baby in the pram or  basinette, as was quite usual in the early years of this century. Gone too is the Saturday morning job of cleaning the knives.  The stains could be removed by a special machine, which some families had; but in others the job was done by rubbing each knife blade with moistened, powdered bathbrick or Oakey paste. Woe betide any youngster who forgot to clean the part of the knife where blade and handle joined.' Children worked on the allotments and while still at school helped in the family business, if there was one.  Young Bob Bond collected the horse from where it was grazing, on the way home from school, and at the age of twelve must have been one of the youngest people in the country with a cab licence.  Some families were poor enough to take   advantage of the soup kitchen in Eton and so perhaps twice a week one of the children would run to Eton in the long school lunch hour to buy a jug of soup.This could be filled out with peas to make a nourishing meal.

In many homes children were expected to earn a few pence whenever possible looking after a neighbour's children, running errands, mangling or maybe even helping in a shop. Payments were small, but when families were large every bit helped and mothers were thankful for 'small mercies'. One man, who worked as a schoolboy for a greengrocer in Eton before school, in the lunch hour and in the evenings for about 2s. 6d. a week before the First World War, remembers one week receiving only a 'hatful of specky apples'. In those years childhood ended with the labour exam at school, and children might start their working life from the age of twelve though   certainly some children stayed until they were fourteen. From then on life was likely to be hard, especially for those who went into service.   At sixteen young Winifred Sibley began working as housemaid at Cippenham Lodge, the home of Mr Twinch, a gentleman farmer. This was her second place and easier than most. Her day did not begin until 6.30 am with the dining room to sweep and dust before the family had breakfast. Mrs Twinch was very strict; there was no skimping on jobs. Church was compulsory on Sunday mornings and young Winifred on her  fortnightly Sunday off had to be back before nine o'clock in the evening.

While so many girls were in service the  launderies provided employment for the married women. It was hot steamy work, without the benefit of electric irons or detergents. Soap was bought by the hundredweight in mottled blue or yellow seven-pound blocks, which were left to dry and then chopped up for use. Washboards and scrubbing-brushes were used for really dirty items, and at Thatch Cottage a second small copper in the yard was used to bring back the whiteness to soiled teacloths. At this laundry the irons were heated and kept hot on a special 'ironing stone' with a ridged surface, which was set by the fire; but at other laundries there was an 'ironing stove' around which the irons could be rested and heated. As well as the flat-irons for the main work there were round-bottomed irons for polishing the starched and glazed shirt  collars; for frills and delicate work there was a range of gophering irons.

The main work of washing was usually done in the cottage scullery, where the copper produced the gallons of hot water needed. Mrs Miles converted one of the pair of cottages known as Vine Cottage into her laundry so that there was room for the various operations indoors, but at other launderies the business had to spread into sheds outside. At Thatch Cottage there was one for mangling, another for drying and a third in which the ironing was done. Some women did one job and others another. Woollen socks and sports gear from College were washed not at the laundries but by individual women, who collected them after games and returned them clean and dry the next day.'

The children of Eton Wick were country children who knew every hedgerow and footpath in the parish. They knew where to find the birds' nests and that the best cowslips grew in the Hyde. The bushy elms along Bell Lane made marvellous playhouses for the girls, and Blind Alley, the narrow strip of land leading from Little Common to Chalvey Ditch, was a place to light a camp fire and cook wild ducks' and moorhens' eggs. Children played with tops and marbles as in any English village, but I like the picture of schoolboys at the turn of the century rolling their marbles down the centre of Eton Wick Road on their way home from Porny School. Both boys and girls played with iron hoops which could be bought at Hearn's shop. If they had to be mended they were taken to the smithy; this too was a favourite haunt of many boys who would creep in quietly to watch the horseshoes being fitted.  They would wrinkle up their noses at the acrid smell of the burning hooves as they peered through the smoke to admire the skill of the blacksmith - joy of joys if one was allowed to work the bellows.

Although they did not all belong to the same era there are scores of other memories which bring back pleasant and exciting days. At the turn of the century a German one-man-band   occasionally visited the village with a dancing bear, and for many years a man with a   barrel-organ and monkey came to the Wick. The girls loved to dance to his music and sometimes he would encourage a few of them to try out their steps on a kind of platform attached to the organ. Another event belonging to the early years of the century and the 1920s was diving for plates in the river. It was part of the competitions and races organised by the Porny School for the boys who learnt to swim at the Royal Humane Swimming Baths at Cuckoo Weir. There were distance races too, and certificates to be awarded; and the school competed against others.