Trade and Commerce Grows in the Late 19th Century

Eton Wick at the end of the nineteenth century was a very different place from that at the beginning, and not just in terms of bricks and its population had risen from about a hundred people to well over eight times this. Many new families had moved into the village - none of the surnames recorded in the early parish registers as belonging to Eton Wick (1640s-1740s) was there a hundred years later. The first house-to-house census was taken in 1841 and the Enumerators' Schedules Books for this and the following three census years give the names and many other details of everyone living in the village at those dates. Several names found in the books are still familiar today - Ayres, Benham, Cooley, Deverill, Hammerton, Miles, Newell, Paice, Prior, Stacey, Woolhouse and others. Few families, however, were constant members of the village, and though some moved only short distances and sons and daughters returned when housing or employment made this possible, others stayed for only a few years. The majority of newcomers came from local villages and towns, but there were people from almost every English county and even Ireland.

This village of the mid-nineteenth century was still a very rural one with at least a third of the men working on the land - farmers, market gardeners, labourers, cowkeepers, jobbing gardeners and pigmen. It was very much a working-class community; more than half the men were either farmworkers, labourers or servants earning perhaps no more than £26 per annum. A rather smaller number were craftsmen - plasterers, coopers, sawyers, bricklayers, cordwainers, a blacksmith and a wheelwright. Most of these must have worked outside the village, except the wheelwright, William Simmonds, for his workshop was behind the Grapes. He must have been a very enterprising person, turning his hand to many trades, for in the twenty years that he is known to have lived in the village he is recorded as beer retailer, carpenter, wheelwright, builder, grocer and coal merchant.

This was a village without any very rich or very poor for the Census Schedules revealed none that were so destitute as to be classed as nor any that belonged to the privileged class of ‘gentry'. The richest members were undoubtedly the farmers of the two largest farms, Saddocks and Manor. In an era when the employment of servants was essential to show that one was above 'the poor and labouring' classes very few in Eton Wick could afford even one living-in maid. Only the Goddards of Saddocks Farm could boast three servants - a governess, a housemaid and general servant. In this household, besides the family with its seven children and the servants, there was also a farm hand living in. Saddocks was large enough by Victorian standards to house them all adequately, but others were by no means so fortunate. A family of nine including grown-up sons and daughters, as well as younger children, somehow managed to sleep and feed in one of the cottages of Prospect Place which consisted of only the one room up and down. More tragically, a mother and five young children were forced to spend at least one night, that of the 30th March 1851, sleeping in the backyard of a neighbouring cottage, having been 'kicked out of house and land'. Not many households in the village, however, were as large as these, in spite of the fact that families were larger - nine or more children was not uncommon - but the elder ones had usually left home before the youngest were born. Infectious diseases also killed many babies.

There must have been scores of villages not very different from Eton Wick, but in one respect it was unusual. This was in the number of working women. There was no question of a choice between marriage and a career, or between a career and a family. On reaching their mid-teens most girls of working class families left home to go into domestic service - to make room at home for the younger children, and because their parents were glad of one fewer mouth to feed and of the small savings the girls managed to send home. If they were lucky enough the girls would get married, and before they had many children, enjoy a few years when they could devote their energies to their own homes and families. Once several children had been born, then many of them found it necessary to turn their hand to any job that might add even a few pennies to the family budget. A few took on dressmaking or domestic service, or even working on the land, but the majority took to laundry work.

In few other villages of South Buckinghamshire were there such opportunities. This was almost certainly because of the proximity to Eton College. From about 1840 conditions at the College had begun to improve, resulting in the employment a greater number of people to attend to the needs of the boys and the staff. The College Laundry was built in 1881. Until this time all the school linen and boys' clothes were washed at small home laundries, no more than cottage wash-houses and sheds, mainly in Eton, Eton Wick and Chalvey. Undoubtedly, the women also washed for their more affluent neighbours and one, Elizabeth Kedge, of Eton Wick (she lived in part of the parsonage) reached the pinnacle as 'Laundress to Her Majesty'. By the end of the century five laundries were advertised in the trade directories - Frederick Burfoot of Alma Road, Mrs Haverley, Mr Sargeant, Mrs Sarah Miles and Mrs Lanfier of Albert Place. 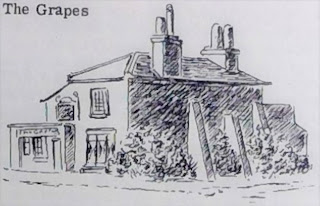 With the laundries came other opportunities in the village. The 1830 Beer Act made it possible for anyone to open a beer house on the payment of a small sum to the Excise Officer. Within three years the Greyhound had received its first licence and a year later the Shepherd's Hut, and the Grapes in 1842. All three were cottages and probably at first sold the beer from a barrel in the kitchen. The licensees often followed another trade. William Simmonds has already been mentioned and David Deverill, beer retailer at the Greyhound in 1841 and 1851 was a labourer. He was succeeded by Isaac Deverill who had been living next door at Thatch Cottage as cowkeeper and dairyman, but who in 1861 told the census enumerator he was a farmer and beer retailer. His son, James, was a greyhound trainer, possibly with Her Majesty's staghounds. Presumably because he was proud of his son's job, Isaac chose the greyhound for the sign of his beer house. 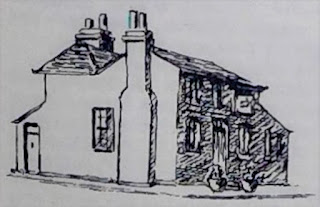 Curiously too the road leading to the Greyhound was named after the family. For many years the road was known simply as Deverill's walk which in time was shortened to The Walk. Not all the beer retailers appear to have bothered with a sign and no mention of one has been found for the beer house run by William Woolhouse at Hope Cottage in the 1840s. At that date with a population of about three hundred the village had a choice of four beer shops and an inn - one for every fourteen families. No wonder in later years the church and chapel found it necessary to fight for temperance.

It is not known when the first shop in the village was opened, but it is likely to have been about this period. John Kirby was in 1846 and is to have lived at Hardings Cottages.  But he did not prosper for long and there was not to be another shop in the village for some years until William Simmonds opened his grocery sideline at the Grapes. Then about 1870 John Kirby returned to the village and again opened a shop, this time at Ada Cottage. He was an old man now and after his death his widow carried on for only a few more years. However, a new tenant took over the shop, and by 1887 it was a bakery and Post Office run by Thomas Lovell. A letterbox stood next to the Three Horseshoes for many years. Almost certainly by this date there was a second shop in the village, another converted cottage - Welman Cottage, or Thames View as it later became known and now Baron Stores.

There were to be no more shops in the village last century, though the rapidly growing area of New Town was almost immediately served two shops. Isaac Crabbe used his front room in the end house of Garrad Place as a general store. Mrs Elizabeth Burfoot was the other shopkeeper and probably was the first to serve at Shakespear Stores (2 Alma Road). Undoubtedly right from the first years Alma Road was the heart, the main street, of New Town; here besides the laundry and the shops were two small businesses. Perseverance Place had been built to the requirements of George Howell, maker, painter and decorator; his workshop adjoined the house. This building has been demolished, but many people remember when the house was used as a surgery. In the 1870s Henry Burfoot had only been a bricklayer living in a small cottage substantial workshop and yard behind. This is now K.G.B. Engineering Works. Henry Burfoot was more than a jobbing builder; indeed he advertised himself in 1891 as ‘builder and contractor, oven builder a speciality, hot range and boiler fixing’.

In the old village another enterprising person seems to have been Henry Elkins who lived in Albert Place in the last quarter of the nineteenth century. He had his own workshop and smithy, not by the house for there was no but on the other side of the brook in the triangular field known as Wheelwrights Yard. Of the other men who were their own masters three were connected with the roads - a fly proprietor who plied for taxi trade from Baldwin Bridge, a carman who hired out himself and his car, or long waggon, and an asphalter.

Email ThisBlogThis!Share to TwitterShare to FacebookShare to Pinterest
Labels: Census, Judith Hunter, Local history, Pubs, The story of a village, Trades and businesses