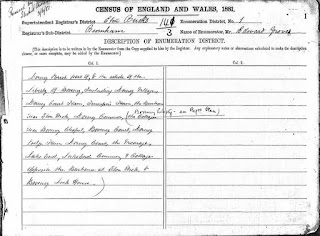 The area classed as Dorney for the 1861 census was the Whole of the Parish of Dorney and the Liberty of Boveney, including Dorney Village, Dorney Court Farm, Trumper's Farm, The Beer House nr. of Eton Wick Dorney Common the cottages nr, Boveney Chapel, Boveney Court, Singers Farm, Dorney Lodge Farm, Dorney Court, The Vicarage, Lake End and Lake End Common.

The 1881 Census reveals that there were 65 households and 281 people resident in the village on the 3rd April. The oldest person, Elizabeth Coster age of 86, she was born in 1785. Arthur Walter Stocker was youngest at two days old. There were 3 other children recorded on the census as born in the first three months of 1881.

Click on this link to view the 1881 census transcription for Dorney. Or copy and paste this URL into your internet browser search bar.