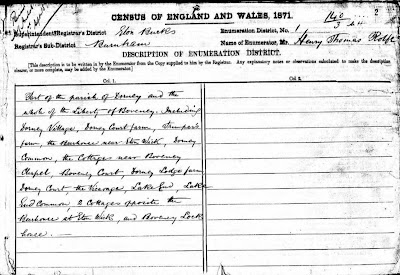 The area included as Dorney for the 1871 census was part of the Parish of Dorney and the whole of the Liberty of Boveney, including Dorney Village, Dorney Court Farm, Trumper's Farm, The Beer House near Eton Wick, Dorney Common, the cottages near Boveney Chapel, Boveney Court, Singers Farm, Dorney Lodge Farm, Dorney Court, The Vicarage, Lake End and Lake End Common, 2 cottages opposite the Beerhouse at Eton Wick, and Boveney Lock house.

The 1871 Census indicates that there were 99 households and 421 people resident in the village on the 3rd April. The oldest people were, Jane Bunce and Elizabeth Caster, both were aged 80. James Hobbrough was youngest at one day old, he was  one of eight children recorded as being born in the first three months of 1871.

Click on this link to see our transcription of the 1871 census records for Dorney.