The United Kingdom Census of 1861 was taken on April 8th, 1861 and was the third of the UK censuses to include details of household members. The total population of England and Wales and the Islands in the British Seas, amounting to 20,223,746. This included those serving in the Army, Navy and Merchant Seamen. 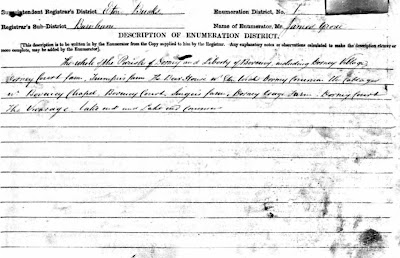 Age and sex of each person: The actual age in years or months for babies under one year are recorded in the 1861 census.

The area classed as Dorney for the 1861 census was the Whole of the Parish of Dorney and the Liberty of Boveney, including Dorney Village, Dorney Court Farm, Trumper's Farm, The Beer House nr. of Eton Wick Dorney Common the cottages nr, Boveney Chapel, Boveney Court, Singers Farm, Dorney Lodge Farm, Dorney Court, The Vicarage, Lake End and Lake End Common.

The 1861 Census reveals that there were 64 households and 324 people resident in the village on the 8th April. The oldest person, Anna Middleton age of 80, she was born in 1781. Frederick Bunce was youngest at one month old was the second child of John and Emma. There were 9 children recorded on the census as born in the first three months of 1861.

Click on this link to see our transcription of the 1861 census records for Dorney.