We're gradually adding bits and pieces about the history of Eton and Eton Wick to the website. If you have done any research or have memories you would like to add, please email us or contact Mrs Teresa Stanton, Secretary. 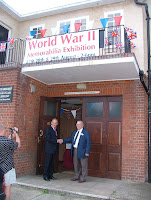 Ten years ago (2005) the Village Hall, together with the History Group commemorated the end of WW2 by inviting the village veterans of that war to a Celebratory Lunch in the Village Hall. It is not known how many Eton Wick men and women served in the war time forces, although a very rough estimate of 130 is suggested. You can read more here....... 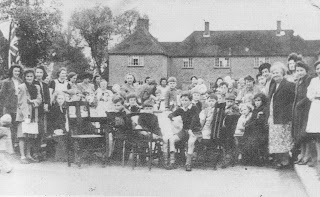 With the declaration of a two day holiday the nation commenced its celebration with church services which many attended to give thanks for victory and deliverance from tyranny. Flags and bunting appeared on the Tuesday morning in Windsor and Slough giving the streets a look of carnival. Celebrations had started quietly in the early part of the day, the crowds gathering during the early afternoon after the Prime Minister, Winston Churchill, had broadcast to the nation that all hostilities in Europe were at an end. Read more here..... 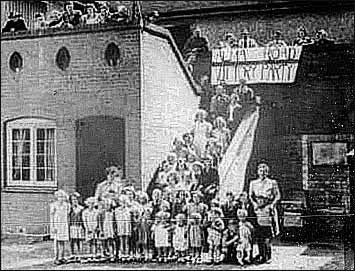 Tuesday 8th May 1945 marked the end of the war in Europe. After six long years of the second world war the Germans had surrendered unconditionally, and although fighting continued in the far east until 15th August (V.J. Day), for many people Victory in Europe day was the beginning of peace. V.E. Day was celebrated across the land, and in this article John Denham describes what took place in Eton and Eton Wick.

During the war many children were sent away from cities like London to live in "safer" areas. One of those children looks back at her memories of being an evacuee and the bombing of Eton College.

On the afternoon of Saturday July 1st, 1944, a flying bomb was seen and heard coming from the direction of Slough towards Windsor...


Commandeered by the Government, pilfered by black marketeers, raided by military police who were outwitted by the P.O.W.s - there was lots going on at Manor Farm during the war!

This resulted in bombs being dropped on the Maidenhead area - probably the largest bombing attack on this area during the entire war.

These include: The Egg, Let's join the Wrens, Officials go Bon Bon, You may be wrong, but You are never right!!, Camp News... Undesirable living accommodation, London in the blitz, Air Raids… Early Fears & Precautions, This away or That away, A Thursday Memory, Eton College Bombed, I remember