The 1950s were good years for the chapel. The number of children attending the Sunday School grew, and within a few years numbers had returned to pre-war strength. Unfortunately, the youth club closed in 1952, partly at least because of its own success which had kept the club a rather closed entity. As the teenagers grew up boyfriends and other new interests and activities brought this part of their lives to an end. The club had failed to attract new younger members. A few years later, however, a junior club was started by Margaret Drake and Edna Harris. The first report suggests it was very a successful venture with a membership of nearly thirty -though an insistence on 'too much' time for prayers and devotional activities was suggested as the reason why membership dropped a little in 1957! The club did not close however, and with a slight adjustment of programme struggled on into the 1960s.

Meanwhile other ideas were being tried. Caravan missions to children in the village met with mixed reactions. Sunday morning breakfasts in the garden at Bryanston, however, were a great success for a few years. A creche was begun in 1954 enabling several mothers of young children to join the sisterhood meetings on Thursday afternoons. A toy service was held in December 1955 -the first of many such services - and the gifts received were taken to Fraton's Nursery at Maidenhead. The following year every child in the nursery received a birthday card and a chocolate egg at Easter.

A party was held for boys from one of Dr Barnado's home and the money collected by chapel members carol singing round the village was given to the National Children's Home Organisation. Cradle Roll services were begun and in 1953 the Sunday School children were taken to London to attend the JMA Golden Medal Meeting. It was a proud day for the chapel and Jean Drake when she received a medal for collecting for ten years. The chapel became the proud possessor of a slide projector bought from the funds of the defunct youth club and this was put to good use by all sections of the chapel. The new Circuit magazine, 'The Link' was an innovation reflecting the regular activity of church business. But perhaps the most important fresh activity of the 1950s for Eton Wick was the revival of class meetings under the name fellowship meetings. Four class leaders were elected -Mrs Chew, Harry Cook, Marjorie Morris and Sylvia Chew -to 'act as "shepherds" to a proportion of the members'. The fortnightly meetings, held in leaders' homes, were chaired by the Minister. They took the form of discussion groups and these meeting became an integral part of chapel life in the 1950s. A few people, of course, did not find them to their liking and later in the decade, when the Rev. Leslie Hall was Minister, the fellowship meetings alternated with mid-week services. 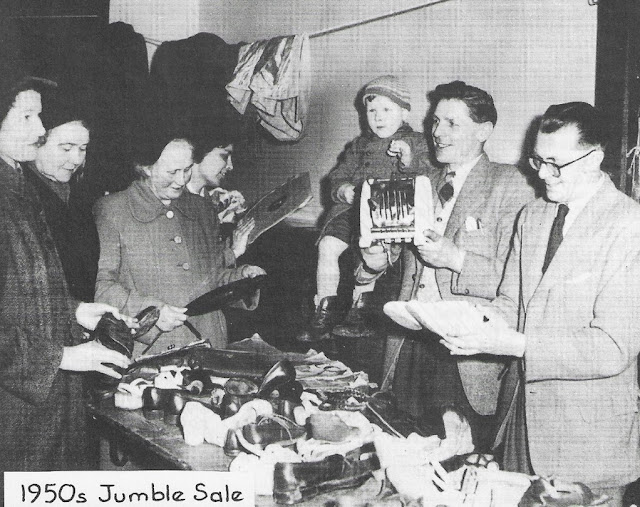 In 1952 the debt incurred by the redecoration of the chapel was at last paid off, a donation from Mr Russell Smith of Cricklewood, London, clearing the final outstanding amount. It was then resolved that the redecoration of the Tough Memorial Hall should go ahead. Two years later thoughts of the trustees turned to the possibility of connecting the chapel to main drainage and at the same time enlarging the schoolroom once again. Work began the next year. The wall between the toilets at the rear of the Hall was demolished and the kitchen extended. New toilets were built. It was a far more modest extension than that of 1935 and much of the necessary money was raised through grants and donations. St Mark's Womens Fellowship of Maidenhead presented a pageant, raising £11 which was donated to the extension fund. Queen Street Church, Maidenhead gave some £30 and amongst those that generously gave grants were the Joseph Rank Trust, the General Chapel Fund and Her Majesty the Queen.

At the end of the decade optimism stood high. Membership had now jumped to thirty-five and the Sunday School to an unprecedented 92 (except when the evacuees children swelled the numbers). The chapel now had three of its own local preachers - Daphne Hogg, who had moved to Eton Wick from Windsor, Tom Dally, who also became the organist, and Helen Banham. The chapel was especially proud of Helen for she had first found her faith in the Sunday School. She recalled her days as a toddler in the infant class to the fascination of the children in the present Sunday School when she preached at the opening of our centenary year.