The mid 1930's was a period of change and increasing expenses.

These last two years had been very expensive ones for the chapel, for as well as the new Hall and all its attendant costs there had been a considerable increase in the ordinary expenses of running the chapel. The most crippling of these had been the quarterly quotas to the Circuit Funds which were first imposed in December 1933 at £8, and then increased to £10 per quarter a year and a half later. In 1935 the chapel was also redecorated throughout, both inside and out and there were several other new incidental expenses and increases. All of this meant that annual expenditure, and therefore income, doubled from 1933 to 1934, and then again, the following year.

Annual expenditure stayed above £80 for the rest of the 1930s - a far cry from the 1920s average of a mere £13 per annum. The chapel keeper now had far more to do, and her salary had been substantially increased. The extension had brought other added expenses, such as water rates, increased insurance, and higher gas bills. More money was paid out to various funds, and small repairs to the chapel together with the necessary purchase of items of furniture and fittings were frequently recorded in the account book. Never again was income or expenditure to revert to the low figures of the pre-extension years, and at first sight it comes as a surprise to find the chapel ceasing to collect pew rents in 1938. Such rents had long been recognised as a regular source of income, but the idea was now considered old fashioned and undemocratic. Financially they were no great loss for they brought in less than £2 per year, and the 'envelope system' of voluntary contributions which was introduced a few years later proved more satisfactory.

In 1936 the chapel was fifty years old and the anniversary was celebrated with a summer garden fete (held at Bryanston, the home of Mr and Mrs Chew) a jubilee service and an evening lecture. The Rev. Dr. Dinsdale Young of Central Hall, Westminster, was the chief speaker and he attracted members and ministers from the whole Circuit as well as a crowd of other people. He was a large man in stature and personality and one of the most well known and loved Methodist preachers. More than this he was recognised nationally as a superb speaker in an era that still set great store by such talent. It was both an honour and a delight that he was willing to preach at Eton Wick.

The chapel was certainly showing no loss of vigour. Small it might be, but its members were ready, willing and able to serve their Lord and the wider community of the Circuit and neighbourhood. The first of the new groups or organisations which appears to have been started about this time was Christian Endeavour. It had been formed about 1929 and consisted of some dozen young people who met on a weekday evening for bible study, prayer, discussion and talks given by their own members.

Members of the group, were expected to be active Christians, willing to help at services and to prepare themselves for becoming local preachers. It was an inter-denominational organisation and some of them did preach at various churches in the district, Baptist and Congregational as well as Methodist. 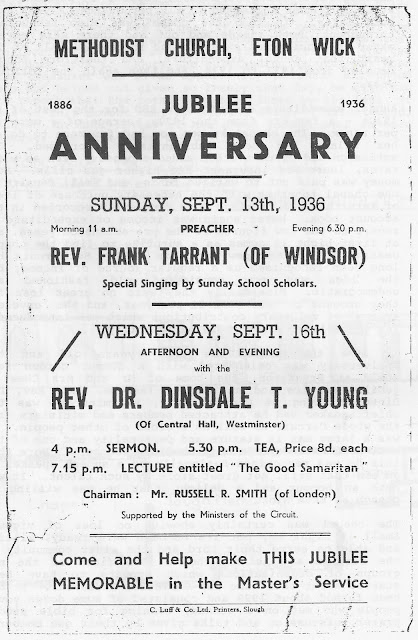 In the end, although several of the young men and women served the chapel in many capacities, only one of them became a local preacher. This was Bill Templeman, an ICI scientist (described in 'The Times' as one of the makers of the 20th century) who found Christianity at Eton Wick and also a wife in Mabel (the eldest daughter of Mr and Mrs Chew). He later became Circuit Steward of the Windsor and Maidenhead Society.

Missionary work had almost certainly long been a concern of the chapel, but it is not until the 1930s that we have any details of the work, by which time it would seem to have become a more organised activity. Since the mid-thirties there have always been secretaries concerned with the activities and collections made for Home Mission, Overseas Missions and the Junior Missionary Association (JMA). The first recorded officials were Miss Winifred Jewell (Overseas Missions, 1934), Miss Sylvia Chew (JMA 1934) and Mr Arthur Morris (Home Missions 1936). The Sisterhood was still functioning and was now under the presidency of Mrs Chew. Its programme was changing as the work sessions and readings were replaced by talks given by invited speakers. Class meetings also continued, though there appears to have been only one class at this time. Mrs Chew was the leader, assisted by Arthur Morris in 1935 and Harry Cook from the year after. In 1936 Mr Morris distributed tracts to 250 houses in the local area hoping thereby to achieve some small measure of good influence. There was also a Women's Work Committee and secretaries to the chapel's prayer union, Bible reading group and Temperance and Social Welfare. With so small a chapel membership, those that were active and willing served in many capacities!

Perhaps the most vital work of the chapel, took place in the Sunday School. Classes were held twice each Sunday and the numbers of scholars stayed comfortably in the sixties with nine or ten teachers and sometimes two or three helpers as well. The surviving minute book of the teachers' meetings begins in 1939 when there were four classes for boys, five for girls and two for the infants. But perhaps the most fascinating details given in the minutes are those concerning prizes. It was resolved that year that scholars making:

Every child who sat the scripture examination was to receive an extra 6d and there was to be a special prize for the scholar with the highest marks, and another for the boy or girl who had the highest attendance record. That summer, the last before the war, the Sunday School outing was to Hayling Island. Tea was taken at the Grotto Café and 1,000 half price tickets for amusements were purchased from Butlins!