At the time Omar was born, on February 26th 1916, his father Alfred was serving on the Western Front with 2nd Battalion, Grenadier Guards. In fact Alfred was destined to be killed the following year and it is unlikely that he ever saw his baby son. When he had married Esther they made their home in Violet Villas, Boveney Newtown. He was killed on July 31st 1917 during the Third Battle of Ypres in Belgium and left a widow with an infant daughter named Hetty and baby Omar. Esther married again and as Mrs Wicks had another daughter, Gladys, in 1922.

Omar attended the Eton Wick Infant School when he was five, and on April 10th 1923 he registered for school at Eton Porny. Because his father had been a professional soldier Mrs Wicks decided he should complete his education at an army school. He left Eton Porny on January 21st 1927 and six days later, one month short of his 11th birthday, he went to the Duke of York School in Kent. It was here Omar joined the band, and it was here he developed a dislike of brass buttons. The band was to result him becoming an accomplished musician and able to play six different instruments. With his stated dislike of brass polishing he decided against a career in the Grenadiers, as his father had chosen, and instead joined the Rifle Brigade as a bandsman. On April 1st 1931, when he was 15 years three months, he reported to Devonport, as number 6912447, 2nd Battalion, Rifle Brigade.

In September 1933 the Battalion sailed from England for Malta where they served for more than four years, until in December 1937 they embarked for Meerut in India. In 1939 they sailed to the Middle East, and as part of the 23rd Infantry Brigade served in Palestine and Trans Jordan. By this time Omar had grown from a, boy into a fine soldier, who loved many sports, including football, hockey, cricket and swimming. With the threatening upset of war the Battalion moved to the Egyptian frontier. Italy entered the war with Germany against the British, and with possessions in Libya, immediately struck east toward Egypt and the Suez Canal.

To counter these moves the British entered Libya, and the important harbour of Tobruk, situated along the strategic coast road, fell to Australian forces in January 1941. Cyrenaica fell to British troops, and Tripoli itself was threatened. With the rapid collapse of the Italian army the Germans dispatched strong armoured units under the command of Erwin Rommel, to halt the British advance. At this time a political decision was taken in London to send many of the much needed troops from the Middle East in support of Greece and Crete. The German drive to take Tobruk and ultimately the distant prize of Suez was sustained and very determined. The harbour garrison held out against the enemy although the Germans did become established in the desert and along the coast at distances as advanced as up to 70 miles east of Tobruk, effectively isolating the British garrison there other than by sea. 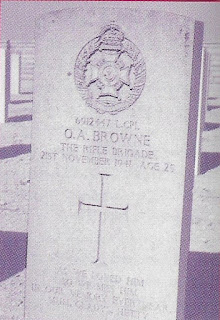 At the time of researching Omar (1995) the cemetery was not very accessible on account of strained diplomatic relations between our respective countries. Consequently a recent photo of the grave obtained through the C.W.G.C. looks tidy but lacking the customary beauty of plants.

Omar Browne was the only serviceman of W.W.II from Eton Wick whose father had been killed in the previous world conflict. Both were professional soldiers, and both are commemorated on the Eton Wick Memorial. Omar also commemorated on the W.W.II plaque on the wall of the Village Hall. In each instance his name is spelt as Browne (with an "e"). His father, Alfred, is commemorated as Brown (without an "e") except at Eton where he Browne.

Email ThisBlogThis!Share to TwitterShare to FacebookShare to Pinterest
Labels: 1941, Frank Bond, Remembering the fallen, Their names shall be carved in stone, War Memorial, WW2