The new chapel was a very modest building, though as large as it could be, given the narrowness of the plot of land on which it was built. The chapel is quite a plain building, dignified rather than imposing, blending in with the terrace houses in the rest of the road, though in 1886 many of the houses were not yet built. It was a rather smaller building than the present one, for beyond the chapel itself there was no hall, only the tiny schoolroom and inside there was, of course, no partition, nor were there proper pews, only forms, and a central pulpit. On the wall behind was emblazoned the message, 'We preach Christ crucified'. A slow combustion stove warmed the congregation in winter and oil lamps shed their warm glow in pools of light. 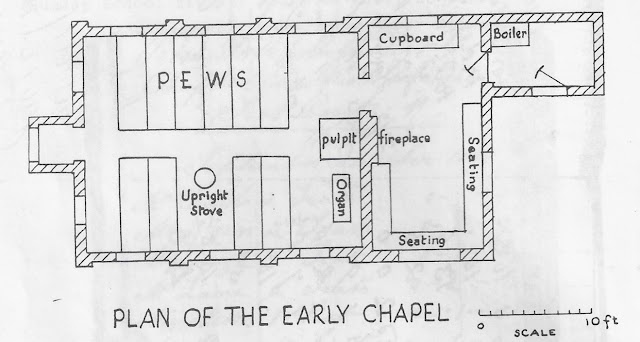 A chapel, however, is more than a building, it is also the society of its members. In the early years membership was small and if the seat rents are any indication of numbers, it was well under twenty. Between nine and twenty people paid the shilling (5p) seat rent each quarter during the last decade of the 19th century, and although the numbers rose and fell the century ended with only 9 people paying. These were Mrs Tough, five members of the Moore family, Mr and Mrs Lane and Mr Cook (Harry Cook's father).

Printer's bills were frequent items of expenditure and on one or two occasions these were specified for 'tickets'. These were class tickets, issued quarterly, then as today, to each professed member of the Methodist church after they had rededicated themselves to God. They were quite strict about such things as one elderly member remembers for Mrs Tough 'bred it into us'.

From 1893 the circuit minutes supplement the chapel records, revealing the close relationship of the Eton Wick Chapel - the youngest at that time in the circuit -with the other member chapels at Queens Street, Maidenhead, Marlow, Cox Green and Cookham Dean. Eton Wick took its turn as venue for the Quarterly Circuit Meetings and there are the occasional mentions of Mrs Tough and other ladies providing teas. On at least one occasion John Lane acted as secretary to the Quarterly Meeting and for many years he was the circuit delegate to the District Meetings. This says much for his standing in the circuit, but the brief mentions in the minutes reveal that he paid his own expenses, and thanks for his generosity is recorded on each occasion:

1896 'That the best thanks of the meeting be given to Brother John Lane for his services as delegate to the District Meeting, also for a donation to the Circuit Fund, being his travelling expenses'.

The observation of Mr Lodge (who chaired the first meeting in the chapel) that 'Methodism in those days meant devotion and sacrifice of both time and money' seems very apt for the 7s (35p) incurred on this occasion represented a considerable portion of his weekly wage, and in other years the journey cost him as much as a £1.