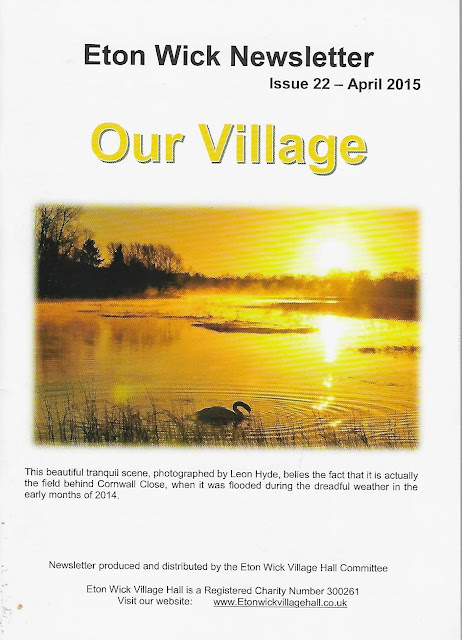 Our rural village - then and later

In 2014 our village history group programme included a talk on the local common and lammas lands. The speaker was Mr Ian Mellor from Eton College, and his talk was very interesting and well received by a customary sized audience of forty to fifty people. As usual this number was approximately two thirds of Eton Wick residents and the others from local districts of Eton, Windsor, Burnham, Dorney and Datchet.

It was in the early 1940s when Eton College purchased Manor Farm (Eton Wick) and in consequence became Lord of the Manor of Eton cum Stockdales and Colenorton, giving them much of the jurisdiction over the Eton, or Great Common as it is variously known; and Little Common; situated north of the village. The College of course owns much of the surrounding land that is not necessarily all lammas. The Lord of the Manor administers lammas through a Court Leet (Committee); a Bailiff and a Hayward. At least that is the custom in normal times, and had been so through the centuries, perhaps since Saxon times. 'Lammas' meaning loaf mass is of Saxon origin and means the celebration (mass) of the harvest (probably rye). Unfortunately if that long continuity was the 'norm' then we have now moved into abnormal times.

I write this while contemplating the seven to nine dairy herds that grazed the commons, under the watchful charge of the Hayward, during my pre WW2 youth. Farmers could use the commons between May 1st and October 31st for a stipulated number of animals; governed by their farm acreage. Cottagers in old Eton Wick (east of Bell Lane) could use the commons for one cow, horse or two pigs). Through the ages this varied according to the need. Certainly until a couple of centuries ago there were less cows, but more sheep. Home weaving for woollen clothes was an absolute necessity at a time of little or no cotton or man-made fibres. The numerous farmers and cottagers with these rights jealously guarded their interests, barring misuse, or use by others with no entitlement. There are a couple of interesting examples of this protective vigilance. The first I may have mentioned in an earlier issue, and it was in 1846 concerning a well-known Eton Town man named Tom Hughes. He had purchased land in Eton Wick that had lammas grazing rights, permitting grazing by farmers and cottagers from August of every year. Mr Hughes disregarded the regulations forbidding dwellings on lammas land, and built himself two houses. County Court ruled against Hughes and he was obliged to remove the houses. Seventeen years later he provided a sheep for the Eton Town feast, on the Brocas, to celebrate the wedding of the Prince of Wales. He also planted a tree on the Brocas, so it would appear he bore no rancour, and was himself a man of no mean means.

More recently, in the 1970s, a friend of mine who did have commoners' rights to use the common, had very extensive improvements to her old house, necessitating complete new flooring and walls. She refused to temporarily change her place of residence because she was sure it would cause her to lose her rights. She had no wish to graze the common, but did want to maintain her right to ensure proper use and not abuse of what she saw as her birth right. With no dairy cows to use the commons or lammas lands we may well say 'what does it matter, it is no concern of ours'. We can do nothing to revitalise the once busy farms, of which probably only one can now claim to be daily active, but this really needs more vigilance, not less. If there had been no interest in Tom Hughes building on his own land, what would have been our inheritance? Would others have done as he had done, resulting in much of our natural surroundings becoming housing estates. There was some local opposition when Eton College created the Rowing Lake, but it has very effectively stopped the creeping east of the riverside houses from Dorney Reach. There are many houses along the Thames from Bray, Dorney and Old Windsor, so with thanks to Eton College, green belt, lammas and north of the river the commons, we continue to enjoy our green and pleasant land.

Regulations are changed by the Court Leet. One example being an old ruling that certain crops must not be grown on lammas designated land. This included turnips and clover. Turnip of course included mangolds which was grown extensively for winter cattle feed. The reason for the ban was practical and common sense, as they were not harvested in time for the August 1st freedom to graze on all lammas land. In 1871 the Court Baron authorised the growing of turnip. Before WW2 South Field (large open area opposite the Church of St. John the Baptist) was frequently covered with mangolds, and the long earth covered clamps which stored the crop, were a very familiar sight along the Eton Wick Road.

Following the harvesting of the mangolds, horses were used to deep plough South Field; and the long earth furrows from north to south (Eton Wick Road to the old highway to Eton) were left to the frosts, winds and rain of winter before the land was used again. A farmer friend once say to me, the furrows afforded much used shelter from the elements for the hares. Perhaps so, and certainly when modern crops and farming methods saw the end of the lovely furrowed land, the hares seemed to disappear also.

The many farms that used the Commons and fields for grazing included Bell Farm; Dairy (or Wick); Saddocks; Manor; Little Common; Crown; Jersey; Long Close and Common Farm. In earlier times at the Eton end of the Great Common was Mustians Farm; a name we now only associate with an Eton College Boys' House. Additionally at various times there were small holdings with cattle; at Thatch Cottage and Wheatbutts, and one or two dairymen who probably owned a field and a few cows. All these retailed their milk to householders in Eton and the village, and to Eton College. All ladled their milk from churns into household jugs, and none to my knowledge used bottles during the pre mid 1930s. In fact the first bottle of milk I can remember was as a schoolboy around 1930 when small, one third pint bottles of milk were sold at morning playtime for one penny (less than %p today). Many families were large and in my instance with four brothers also at school at the same time, five pence a day was a prohibitive sum, and in so many cases those perhaps needing the milk most, never got it.

The reader may ask why could the commons be grazed from May 1st and the lammas lands not grazed before August 1st. Commons throughout the land have various uses to the local cottagers. Some places such as Stoke Common allowed furze to be taken, others perhaps, willow or turf, but here the commoner's rights are restricted to grazing. Grass makes rigorous growth in the spring and May 1st allows that it be grazed. Lammas however is a right to graze and glean on privately owned land when the crop grown on it had been harvested. August 1st was considered the date when the crops would have been gathered. Often the corn crop of today would not have been gathered, but when the rules were originally set, the quicker maturing rye was the generally grown crop. The village recreation ground is on lammas land but of course we now consider it an irrelevance as there are no cattle needing to use the commons or the lammas. In the early 20th century it would have been grazed; if for no better reason than the Haywards' need to herd all the cows over lammas lands. To do this it was necessary to have an access point at both ends of the Rec; and perhaps the relic of this can still be seen. There is a gate at the top end by the car park, and in the opposite corner leading to the river the gate has been replaced by an access structure that of course if it were still needed for cattle would not be suitable.

Now in the 21st century we have no dairy herds, no Hayward, probably no bailiff and maybe no cottagers with a right to graze for the simple reason that they did not register their rights in 1965. It matters, because it would only take an Act of Parliament to relinquish any or all of the protective conditions we enjoy. It could be later than we think. Apathy is no replacement for observant vigilance. Without commoner's rights, and certainly nobody living west of Bell Lane would ever have had these rights, we have no legal voice, but we can draw attention to known violation and abuses to those who do have the responsibility. Those with rights are the farmers and of course the Lord of the Manor. Listing the farms and small holdings in the village of the pre WW2 years when the population was about 1,100 reflects how much more rural Eton Wick was before the mid 20th century.

This article was originally published in the Eton Wick Newsletter - Our Village and is republished with the kind permission of the Eton Wick Village Hall Committee. Click here to go to the Collection page.
Posted by Steve Denham at 06:00