Eton Wick Newsletter: Our Village August 2014 - Lest we forget 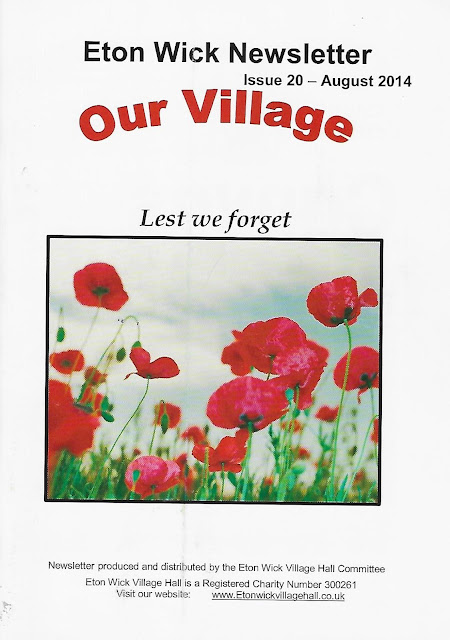 Since the beginning of 2014 we have had many television and radio programmes telling us it is the 100th Commemorative Year of the start of the Great War (1914 —18); the first ever conflict involving most of the 'so called' civilised world. Hopefully without over repeating the oft quoted facts, it is appropriate to turn our attentions to the war as it affected Our Village' and that of our immediate neighbours. There were of course no televisions or radios (wirelesses as they were first known). In fact Eton Wick's first known wireless was a Cat's Whisker set assembled by two villagers in 1923. Both had served in the war. Bill Brown (Army) and Norman Lane, Royal Flying Corp (R.A.F. as from April 1st 1918).

The village had just two gas street lamps in 1914; there was no bus service, no main drainage, and with few exceptions only, a few newish houses had piped water and cesspit sanitation. I am told there were only two houses with bathrooms, but I cannot be sure of that. Nobody expected to travel further than their legs would take them, unless of course they were tempted, as young men are, to answer the posters displayed on Public Notice Boards to 'Join the Army and see the world'. Many did just that, and some of Eton Wick and Boveney's fatalities were men who had served their commitment in the forces; married and had settled down in the village. From day one of the war starting, they were back in uniform as re-called trained reservists, and with a good conduct record of previous service were invariably promoted to senior N.C.O's. In fact Eton Wick's first fatality was Sergeant Albert Caesar who was killed on September 4th 1914, fighting a rear-guard action with the Grenadier Guards at the forest of Villers Cottaréts in France. This was only one calendar month since the outbreak of hostilities with Germany on August 4th. The sad troubles of Mrs Caesar seemed never ending. A few months before Albert's death they had lost their five year old son who was drowned in the Thames, near the college swimming place known as 'Athens'. He was walking the long way home from school at Eton Porny. Six months after losing Albert, her one year old daughter died. Little wonder she eventually left her Alma Road home for a place in Australia. Albert was one of Eton Wick and Boveney's 34 Great War fatalities. 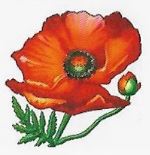 The combined village population at that time was approximately eleven hundred. There were no officers among the village fatalities in the Great War, and only one among the twelve men killed in WWII 1939 — 1945. This I think reflects the working population of Eton Wick which really has no 'big house' residents. Two of the thirty four were in the Royal Navy and thirty two were soldiers. We suffered no female casualties in either conflict. Fifteen men were aged under twenty five years and two were over thirty five. At least ten left widows with young children. In comparison Eton Town lost fifty eight men and Domey, with a smaller population lost five men, including one twenty two year old officer. Without knowing the exact number of Eton Wick's serving men, I estimate it roughly at one hundred and fifty to one hundred and eighty. This would still be a slightly above average of approximately one in about seven fatalities nationally.

Eton College was undoubtedly well above the average, losing approximately one in five of an astounding number. Five thousand six hundred and fifty Old Etonian served in the Great War with one thousand one hundred and fifty seven paying the supreme sacrifice. At the war's end 18 Generals went to Eton - their old school; to celebrate peace. Numbers are so vast they numb our conceptions. I once read that if the Great War dead could march from Edinburgh to London the columns would be so long that the first would arrive in London before the last had started. Certainly beyond my comprehension.

The war had started in 1914 with volunteers. The regular Army; recalled reservists (ex-regulars); Territorial battalions, and wartime volunteers. Early volunteering had been very good, but of course ongoing casualties had also been high. In March 1916 conscription for the 18 year olds to 41 years was introduced, with exemption of service for munition workers, shipbuilders, miners. some transport employees and agricultural workers. The war pre-dated the Industrial Estate at Slough, and in fact only agricultural substantially kept some Eton Wick men out of uniform. It will be seen that fatalities before March of 1916 would have been voluntary servicemen. Some killed later had also been volunteers. Old local newspapers report on others applying for exemption on personal grounds. Two from Eton Wick were a publican and a shopkeeper. Neither felt they could leave everything to their wives. The result was invariably being given three or six months to get their affairs in order, with no further right of appeal. In fact two and a half million had volunteered by the time conscription was introduced.


Nationally there were seven and a half million men aged 18 - 41 and conscription in 1916 brought a further two and a half million. An almost identical number were exempt, either industrially or on medical grounds. By the end of the war; in 1918; between five and six million had served, and approximately three quarter million had lost their lives. Sadly casualties had been double the number of fatalities, and many of those were affected for the rest of their lives. Some suffered permanent gas damage to their lungs; there were many shell-shocked. and the limbless. In Eton Wick we had at least two men with artificial legs; a shell-shocked man who stood for hours at his gate; almost a recluse, never to have employment.

Another man in Eton was cruelly dubbed The Mad Major as without apparent reason he suddenly burst into a run screaming 'Up guards and at 'em'. Another regularly stood on Eton's Barnes' Pool Bridge selling boot laces and matches from a tray hanging from his neck; trying to supplement his pittance of a pension. Presumably the pension varied according to the incapacity, but if we relate this to a soldiers' Separation Allowance at that time, it was indeed a pittance. A soldier's wife received twelve shillings and six pence (62½p) weekly with another eight shillings and six pence (42½p) if she had two children. Of this, the soldier had three shillings and six pence (17½ p) deducted from his weekly pay.

Prolonged war inevitably brings and hastens changes (a few good - some bad). The 1914 - 18 war brought for the first time gas warfare, conscription, introduced steel helmets (1916), advanced the development of aeroplanes and mechanical vehicles, brought civilian rationing and gave us many medical and surgical advances. It also saw the decline of large and stately homes with their 'upstairs, downstairs' uniformed staff. Motor vehicles began to replace the faithful horses. Ex-service clubs sprang up throughout the land, where demobilised men could meet, and perhaps relate horrific experiences they never mentioned in the home. The Imperial War Graves Commission; later renamed 'Commonwealth War Graves Commission' grew from nothing into a truly awesome organisation, giving the nation pride, and even with deaths on such a scale, a feeling that here was satisfaction with an organisation that had truly fulfilled its object of remembering the dead; creating beautiful cemeteries, and for the unidentified, magnificent memorials. There are many graves in most cemeteries where these unidentified internments have the standard C.W.G.C. headstone suitably inscribed 'Known unto God' or perhaps 'Their name shall not be blotted out'. Such facts as are known are inscribed - maybe the Regimental badge or date of death. Next of kin of the identified dead were invited to submit a small text to add to their family headstone, and many of these are very moving. The unidentified may well have a grave, albeit with no inscribed name, the names of these men were engraved on various memorials by the C.W.G.C. Twelve of Eton Wick's thirty four fatalities are on these memorials. They are:

Of the other twenty two, four have graves in the Eton Wick churchyard and one is buried in Iraq; one in Kent (RN) four in Belgium and twelve in France. This is a great contrast to WWII when we suffered just twelve fatalities in a wider variety of theatres of war — Syria 1. Libya 1. Egypt 1. Burma 1, Luxemburg 1, Italy 2, France 2. UK 3.

Returning to 1914 -18, practically every community in the country paid for, and got its own local memorial. At Eton Wick a public meeting elected a committee (at least three had lost a son or nephew) who considered proposals for a memorial in the form of a clock in the church spire; a stained glass window; (with an inscribed tablet beneath) a lych-gate; a wall round the church; a monument outside the church with an inscribed tablet inside. At first the meeting decided on a stained glass window, with another suggestion from Mr Hammerton (Father of one fatality) that a marble stab be erected in the Institute (now named Village Hall) grounds. Eventually, following much discussion, they settled on a Churchyard stone memorial and the names of the fallen 'carved in stone' (please see the photograph on page 20). The final cost was £197-11-6d. A princely sum for the small village to raise at that time, with only one villager able to give more than one pound.

They said it was the war to end wars, yet it happened again and again. When will we ever learn.