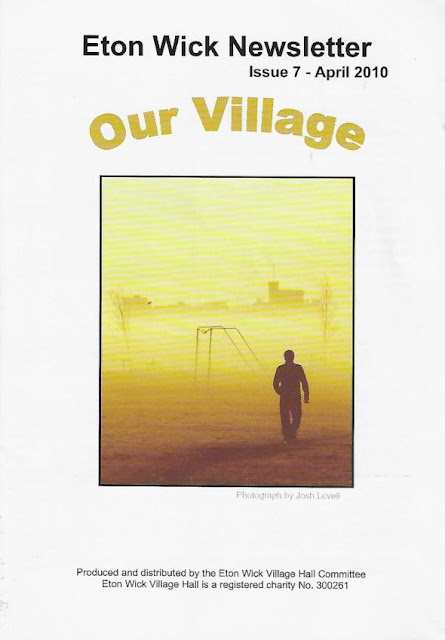 Among Eton Wick's numerous benefactors were two, both now long since departed, whose work and generosity was exclusively for the community. One was Edward Littleton Vaughan whose unstinting interest and help had such a wide scope, covering the School, Church, Youth, Sports and social activities.

It is just 70 years since Mr Vaughan, usually referred to as 'Toddy'; died aged 89 years. Very few today can claim to have known him and those of us who can will only remember him as an elderly, well dressed man, short, stocky and serious, having much difficulty walking around.

Being young ourselves we found it difficult to accept Edward Littleton Vaughan had once himself been young and certainly did not appreciate all he had meant to Eton Wick in the previous five decades.

Annually we saw him at the Eton Wick Horticultural Show (surely 'The Day of the Fair' in those pre WW2 years) whereas President he gave a speech and presented many prizes. We saw him at St. John the Baptist Church where he always read the lessons and even explained the odd passages; we saw him at the Boys' Club where he occasionally 'dropped in' to play one of us at skittles, shove 'a-penny, draughts or Lexicon. Also we met him following Confirmation, when he gave first time communicants a signed copy of the New Testament or Prayer Book. This was not necessarily understanding him, though we did appreciate the respect accorded him, but not all he had meant to Eton Wick.

Let us look at his earlier years. He was born in 1851, educated at Eton College 1865 — 1870 then at Balliol College, Oxford until 1874 and at Leipzig University until 1876. Apart from a short break he returned to Eton College as a Master for the next 43 years. In 1884, when 33 years old, he became a 'College' housemaster; a position he held for 29 years. He retired in 1919 when 68 years old and two years later he married Dorothea. He returned from his honeymoon in France bringing small novelty gifts for each of the girls at Eton Wick School, an unusual pursuit when on honeymoon but typical of his generosity. I have read that at one time he knew all the children by name.

After the Great War he retired from College to spend his married life at 'Willowbrook' in Eton; a home he had built for himself and Dorothea.

At this time he undertook the daunting job of recording the sacrifice of Etonian's in the recent conflict. Of the 5,610 who served in the forces 1,124 were killed and 1,068 were wounded. They had been awarded 13 Victoria Crosses, 554 Military Crosses, 407 Distinguished Service Orders and many other gallantry medals. Medici were commissioned to suitably bind this work for posterity. Of other personal achievements, in 1879 as a 28 year old he climbed the Matterhorn and I was once told his lameness was due to a horse riding accident while going over private jumps in Boveney. He had two houses in the village, Boveney Cottage and Wheatbutts Cottage. He never did live in Wheatbutts but most of his village influence emanated from that house and its orchard, now a housing estate. He first leased the property from the Eton Poor Estate and in 1919 purchased it.

Eton Wick's first school was built in 1840 along the main road at the top of what later became The Walk. In 1888 the building had been outgrown so the school moved to its present site in Sheepcote. It is believed Mr Vaughan had already established a Young Men's and Working Men's Club and it was now able to function more expansively in the original and empty old school building. So much was happening in the village about this time and probably not all was attributed to 'Toddy' but so much was. The village football club was formed in 1889 and he became its President. The cricket club was formed and he was a Vice President. When the football team won a competition he treated them to a meal at 'The Three Horseshoes' public house.

In 1894 Eton Wick had its own Council (until 1934) and 'Toddy' was Chairman for the first 20 years, with most Council meetings being held at his Wheatbutts Cottage. In 1897 he planted an oak tree on the common, close to Wheatbutts, in commemoration of Queen Victoria's Diamond Jubilee. For its first 40 years the young oak was protected from grazing cattle by a high iron guard. 'Toddy' also kept a close watch on the tree, which as lads we could testify to. Every November we built a bonfire near the tree and he would ask us not to burn it by being careless. In recent years that grand mature oak was judged as one of the three best trees in the Royal Borough.

In 1903 the old school building was sold for shop development so he made Wheatbutts Cottage available for the Young Men's Club and various other organisations, including The Village Rifle Club and later a Harriers Club. His orchard beside being used annually for the Horticultural Show was now made available for Children's parties with entertainment, bun and orange etc., He then gave the land and cash to build the Eton Wick and Boveney Institute and Vaughan Club. This was opened in 1907 and with extensions over the years we now know it as the Eton Wick Village Hall. He equipped the upstairs room with climbing ropes and vaulting horses for a gym group. In fact the ropes are still there but have been tucked above false ceiling tiles.

His influence bought about the early library; The Women's Institute and a Boy's Club in 1935. He had a major role in the formation of the Eton Wick and Boveney Scouts, Wolf Cubs and Guides in the 1920s and the building of their hutted HQ in Wheatbutts orchard around 1926. On occasions he took Cubs and Guides to their annual camp and reportedly paid for the very poor. In 1905 a public meeting was held in the new school to obtain unanimous approval to free the proposed Institute site of laminas restrictions.

There was so much more to Mr Vaughan. During the Great War he proposed purchasing a boar to service the many privately owned pigs in the village, thereby producing a scarce meat supplement. And so it went on. He died at 89, as did Dorothea 13 years later. She too was a strong, determined lady, carrying on 'Toddy's' village interests and being President of The Women's Institute and the newly formed post WW2 mixed youth club. Following 'Toddy's' death the College Vice Provost wrote "Edward Vaughan had two loyalties, one to Eton College and the other to Eton Wick and both have every reason to revere his memory".