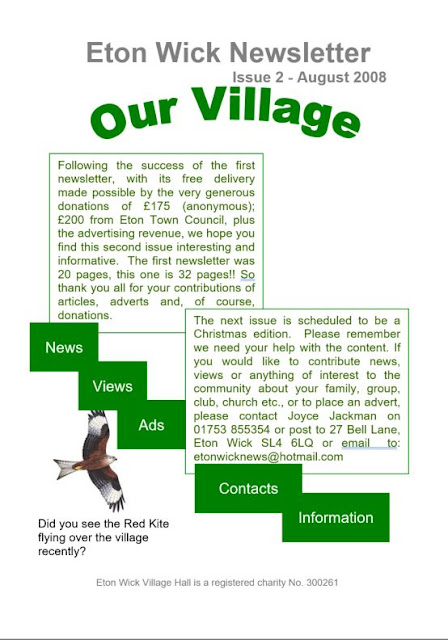 In the first newsletter we looked at the old village of Eton Wick which until 1934 had its west boundary at Bell Lane and the east at the Folly Bridge (the slads).  In the early 1920’s this boundary was moved west, enabling Eton Town to develop Somerville Road and that part of South View.  We will leave the late 19th Century extensions of the village west, into what came to be known as Boveney Newtown, until a further issue and will now take a closer look at the old Eton Wick and its development.

It is believed that the thorough-fare to Eton and Windsor during the middle ages may well have been the old Kings Highway that passes  from our present day Village Hall, along Haywards Mead, continues past Cuckoo Weir (now the Swan Sanctuary) along Meadow Lane to Brocas Street.  This may, or may not be so, but looking closely and accepting the importance of the early farms, it makes sense that the said highway starts from Bell Lane (south) which itself would have been a muddy cart track from Bell Farm, and is joined by the old Sheepcote track that crosses our present road by the church.  This track, now Sheepcote Road, was almost certainly made by the traffic of Saddocks and Manor Farms several hundred years ago. The rutted highway gives us a fair indication of what roads were like all those years ago.  Many of us can remember Sheepcote Road just that, a muddy, gated track in the 1920 – 1930s.

Thinly populated, Eton Wick had no school; hall; gentry homes or church until 1840, when a school room 29’ x 21’ was built along the Eton Wick Road, on the end of the Greyhound Pub (established 1833) garden.  Remember at this time dwellings along either Common Road or Eton Wick Road often had a small holding/garden stretching as far as the other parallel road.  The Greyhound’s ground being about 100 metres long.  Dr. Judith Hunters’ excellent book tells us ‘The Walk’ derived its name from ‘Deverill’s Walk’, Deverill being the pub landlord and ‘Walk’ on account of the well trod track from the main road to the public house.  It was 1902 before the track, so named, was developed and built along.   It was thought the houses along ‘The Walk’ were the first Eton Wick newly built homes to have piped water installed.

In 1866 the Village got its first church in St. John the Baptist C of E.  Queen Victoria gave ½ acre of the Crown land of Sheepcote and a £100 donation.  It would be 26 years later before the churchyard was consecrated and the first village burial took place.

With the sudden influx of children in the newly developed Boveney Newtown (west of Bell Lane) during the 1880’s, it was becoming increasingly difficult for the small school to accommodate them all.  Strictly speaking the children of Boveney were expected to attend a school in the Burnham area but it was not acceptable for them to all trek to Dorney, so it was decided to build a larger school in Sheepcote.  Again, Queen Victoria gave ½ acre and £100 towards the £1,000 the new school would cost.  It opened in 1888.  The girls were expected to complete their education in the village but the boys only attended until 7 years old and then were obliged to attend the Eton Porny School.  Many walked along the unlit; unpathed road four times a day - there was no such thing as school meals, buses, cars and very few cycles.   At that time there were no buildings between the church and Willow Place, apart from the sanatorium.  The first four pairs of houses in South View were not built until after the 1914 – 1918 war when Eton Wick Council had them built as rented homes for returning ex-servicemen.  Perhaps this bold move prompted the Eton Council to ask the village to agree to the boundary move that gave them the area to complete South View beyond the sanatorium and to develop Somerville Road. The name Somerville is derived from the Eton Council’s Chairman’s name, as he had negotiated the land swap with Eton Wick.

Meanwhile the first school building was used by young men and boys as an institute.  In 1902 this came to an end when shopkeeper, Mr. Pratt of Eton & Windsor, purchased the site and Eton Wick’s first purpose built shop was erected and opened in 1904.  With the Institute closed the village benefactor Mr Vaughan (a Classics Master at Eton College) again came to the rescue and made Wheatbutts Cottage temporarily available.  Meanwhile, he set about freeing a plot of his land from restrictive lammas rights and then donated the plot and paid for The Institute of Eton Wick and Boveney, which is now known as The Village Hall. It was opened in 1907 and has been extended and improved over the years to meet the changing requirements.  Originally the entrance to the hall was on the east side, now used as the library entrance.  It had an equipped gymnasium upstairs and in fact the old climbing ropes will still be in that east facing room on the upper floor, but are concealed by the modern ceiling slats.

Boys continued to attend Eton Porny School until 1940 when Ragstone Road School took the lads from ‘Porny’ at the age of 11 years.

Apart from the Boveney Newtown and post World War 2 developments it just leaves the Recreation Grounds that first appeared circa 1904.  We can perhaps look at those in a later issue covering sports and clubs.
Frank Bond

Click here to read Our Village August 2008 - the second edition of the Eton Wick Newsletter that this year celebrates its 10th anniversary.