Changes - And All Stay The Same 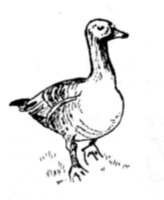 The eighteenth century brought a new look to the village in other ways. The earliest change resulted from a decision of the Court Baron of 1st April 1700 that 'no geese or gander be kept at any time hereafter upon the Commons'. A small event perhaps, yet not a trifling one, meaning far more than the removal of the birds from the rural scene though they may still have been kept in cottage gardens. Living as we do in an age when most of our food and possessions are bought in shops, it is difficult to imagine that three hundred years ago the. People of Eton Wick, and every other village lived in a  subsistence economy. Most food was grown, gathered or gleaned; bread was baked and beer brewed by the housewife, and a goose that fed itself mainly on the common pasture was a cheap and very welcome source of meat and eggs.

Sheep, hogs, oxen, cattle and horses could still be pastured on the commons and Lammas lands during the proper seasons. The livestock was put in the charge of the parish hayward, each farmer paying 2d per head of cattle and the townsfolk and villagers 4d. This was not discrimination in favour of the farmers but merely because the stint (or restriction) allowed the pasturing of only one beast for each house and then more according to the number of acres owned or rented: for example an extra head of cattle for every five acres farmed and a sheep for each acre. Sheep must have been' a familiar sight, for the regulations confirmed at the Court Baron concerned themselves with the time and place for washing the wool. Spinning and weaving were still household tasks a spinning wheel or loom was a valuable possession, as the will of Elizabeth Fennel showed when she left her weaving apparel to her niece.

The eighteenth century saw many changes in agriculture - new crops, new breeds of livestock and new ways of husbandry; but, country people being notoriously conservative, the new ideas were slow to spread. So it is surprising to discover the same Court Baron of 1700 recording that every farmer was allowed to grow two acres of turnips for every twenty he farmed. Turnips were still revolutionary farming. In earlier centuries and still for many more decades to come, in many parishes, a great proportion of the cattle were killed each November because there simply was not sufficient hay to keep them alive during the winter. With the introduction of root crops such as turnips, such slaughter was no longer necessary. Whenever the Manor Court first allowed this innovation it must have been accompanied by much head-shaking and speculation until the idea had proved successful.

However attractive these new ideas in agriculture appeared, it was difficult for an individual farmer to take advantage of them until his cattle could be kept separate from all the others in the village, and until he could plant what he liked on his own land and not comply with the farming practices of others with strips in the common fields. Neither could he make use of the new farm machinery until his land was in large enough plots to make it practicable; it was often advocated that the only way in which this could be achieved was to enclose the open fields and the commons too. Such enclosure could be accomplished by private Acts of Parliament,  private agreement, or later under one of the Acts. Usually, an Inclosure Commissioner was appointed to survey the parish and rearrange the land holdings so that as far as possible each owner's land formed compact blocks; rights of pasturage were usually extinguished and the commons divided up. Only rarely were the cottagers compensated for their loss of rights. This Is perhaps too simplified a summing up of a very complicated story, but the important fact about Eton Wick Is that none of this happened.

The exchange of strips so that two or more lay side by side had occurred from early times, as surviving records from the fourteenth to eighteenth centuries clearly show. One of the earliest and most detailed concerns eighteen scattered acres owned by Sir William Stratton exchanged for sixteen acres of John Jourdelay, almost all of which lay next to each other's land. From the sixteenth century onwards there are mentions of closes, small hedged fields in the modern sense, such as Bushy Close, Shipcote Close, Ferny Close and Cony Close which were part of Saddocks Farm in 1650. It Is clear that in general most of the closes remained subject to Lammas rights and the amount of 'in-land' around the Farmsteads and homesteads was small. Encroachment on to the waste or commons and the theft of part of the common fields did, however, sometimes occur and people were not always slow to complain. In 1459 a court roll records that both Eton College and Thomas Jourdelay 'had done grievous injury to the community by enclosing land for themselves'. The matter was to be brought up again at the next court but there is no further reference to It in the court rolls; so one must assume that the manor tenants did not obtain redress for their grievances. In 1605 complaints were made against Henry Bell because he had enclosed several pieces of the king's waste and also a piece of Lammas ground and added these to his own freehold land. It was also stated that the eight cottages built by Henry Bell and others were very prejudicial to the parishioners and inhabitants in respect that their privileges and benefits of the Common (were) much hindered by those cottages'. Once again, however, the outcome is not clear.

In the same report of 1605, a detailed description is given of the trees and wooded areas on the Crown lands and in particular those of Saddocks Farm, providing us with a glimpse of the landscape and the changes being wrought upon it. While much of the parish was open and hedgeless, there were abundant fully grown trees and areas of coppice at Broadmoor, Sheepcote, Gudgeons Pool, around the Hide Field and in the vicinity of the farmhouse. Many of the trees were pollarded - eighty in one coppice adjoining the farmyard - and it is interesting to reflect on the many uses of the wood. The report lists the value of the trees and coppice by the potential loads of firewood and timber. Henry Bell does not appear to have had a right to use the timber, but a lease of 1640 to a later tenant specifies his right to take timber for the repair of buildings, carts, the plough and gates belonging to Saddocks. By 1650 much of the woods, if not the individual trees in the hedgerows, seem to have been cut down, and part of North Field had been named Oak Stubbs.

As late as 1778 the cottage which was later to become Manor Farmhouse was without either garden or farmyard. It lay beside the road and the land immediately to the east was divided into very narrow strips. Yet before the end of that century there was a farmyard and early in the nineteenth the necessary exchanges had been made so that part of the North Field had become the in-land of Manor Farm. All this resulted almost certainly from the enterprise of John Penn, who bought the manor in 1793. The house too was enlarged and an insurance plaque still bears witness to the value that John Penn placed upon his improved property. John Mason, farmer, became the new occupant. Land on other farms was being consolidated, in particular near Bell Farm. Sometime between 1754 and 1797 the last of the dispersed strips in the Great Hide Field disappeared, though in this instance they remained subject to pasturage rights. 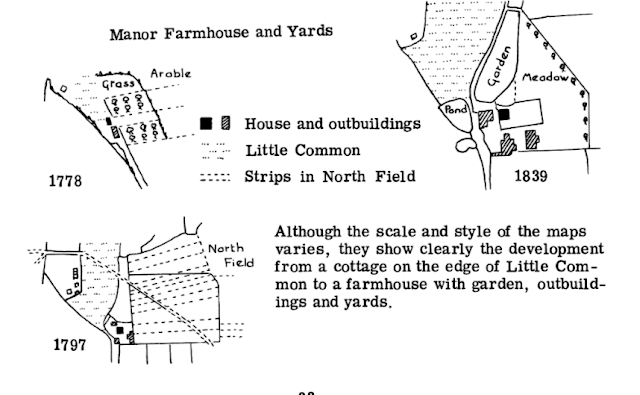