The United Kingdom Census of 1901 was taken on Sunday 31st March, that year and was the seventh of the UK censuses to include details of household members. The total number of persons returned as living in England and Wales at midnight on Sunday, March 31st, 1901, was 32,526,075. This shows an increase of 3,523,550 upon the number enumerated on April 5th, 1891, and gives a decennial rate of increase of 12.17 percent. 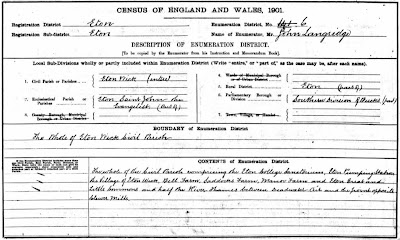 The area for the 1901 census included was the entire parish of Eton Wick comprising The Eton College Sanatorium, Eton Pumping Station, The village of Eton Wick, Bell Farm, Saddocks Farm, Manor Farm and Eton Great and Little Commons and half the River Thames between Deadwater Cut and the point opposite Clewer Mills.

The 1901 Census reveals that there were 104 households and 414 people in residence in the village at midnight on the 31st March. The oldest person, Mary Greenwood at the age of 83, she was born in 1818. There was one other resident in their 80’s. Florance Giles was youngest at one month, she was the only child of William and Ada. Sarah Ann was the only baby born in the first three months of 1901 within the civil parish of Eton Wick.

Click on this link to see our transcription of the 1901 census records for Eton Wick. We will be looking deeper into what the census reveals about Eton Wick and publish our findings in future articles.